5 Easy Steps to an Honest and Equitable Judicial System 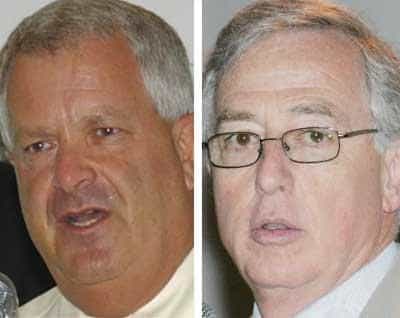 In less than 30 seconds on the Internet I can find what Casanova’s job was in 1798, what Darwin had for dinner on January 3, 1834, 1,500 recipes for banana cake and how to add water to a sub-pump.  What I can’t find is how two judges could “choos(e) to treat children as commodities that could be traded for cash,” taking $2.6 million in kickback cash in return for unfairly sending children to jail.

According to Clarence Page in his editorial in yesterday’s Chicago Tribune, “the two (Judges Mark Ciavarella and  Michael Conahan, pictured above) received a commission for every day they sent a child to private detention centers…As many as 2,000 kids are reported to have been incarcerated out of 5,000 who were sentenced,” which apparently is 2.5 times the average rate.

For Page, he was “appalled that the confessions of Ciavarella and Conahan were overshadowed completely by other news, like the Post’s chimpanzee cartoon…which sparked national protests and an apology from the Post and Rupert Murdoch…”

For me, as a marketer and communication/presentation coach, I always remind clients:  People remember things in three’s-what are the three things you want them to remember, and what is your call to action?

Perhaps it’s just that the New York Post cartoon is an easier fix.  1.  Newspaper ran cartoon.  2.  People found it offensive.  3.  Admit you are wrong.  Call to Action:  Apologize to the public.  You make your point.  You get an apology.  Case closed.

But the case in Pennsylvania signals an awakening more than a closure.  How could this have gone on for so many years (2003-2008)?  What changes to the system are needed to better protect children?  And what about the 1,000’s of children’s lives thrown off track, time lost never to be regained?

While Page questions a distinction between civil rights and economic disparity, institutional racism is about unequal access to resources, which is abundant here.   Even in the field of diversity, Jessica Marquez, New York bureau chief for Workforce Management says “experts believe there will be more focus on multicultural as well as socioeconomic diversity within the workplace,” in the future.  Just as globally, the idea of civil rights is morphing into a call for human rights.

Karen Bass, Speaker of the California Assembly said “You judge a society by how it treats its most vulnerable citizens.”  While for me a quick “5 Easy Steps to an Honest and Equitable Judicial System” doesn’t spring to mind, I am left with the words of Neil Young in response to the shootings at Kent State in Ohio years ago:  “How can you run when you know?”

And so I am left needing to do something.

That’s what I came up with, and it doesn’t feel like near enough.  What do you suggest?  What will you do?  If you are ready to address diversity and inclusion in the workplace, are you ready to ‘walk the talk’ and integrate the same tenets into your core values?  What will that look like?