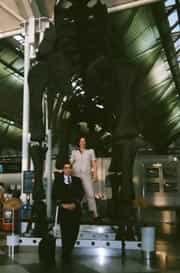 That is me and Jorge, a flight attendant with United Airlines, and the photo was taken by fellow flight attendant Gina, next to the Brachiosaurus in Terminal 1 at O’Hare, following a flight back from Puerto Rico last week. I was on my way back from a conference regarding the influence of culture on delivery of Customer Service, so at first glance, when I saw Jorge, who is Hispanic and Gina, who is African American, working so well together, I thought “isn’t that a wonderful glimpse into effective intercultural communications in the workplace.”

But as their contagious humor, warmth and positive energy filled the plane, I realized my analysis was too two-dimensional.  Dimensions of culture reach far beyond gender, ethnic or racial identity, or other ‘physical markers.’  Sometimes it’s the culture of ideas, or in this case, people who are just plain happy (as opposed to people who are generally sour).

Those in the world of Improv, a la The Second City, operate from the notion of “Yes, and” as opposed to “No, because.”  That was the common culture that bound Jorge and Gina together.  “Yes I can help you.”  “Yes I am here to make your flight safe and pleasant,” “Yes I’ll take this photo for you even though we are off the plane and I don’t have to be nice to you anymore…” as opposed to “Why does your need for more water concern me?”

Try it one day.  No matter what someone says to you, respond with “Yes, and…”  How does the conversation go?  If you look at your colleagues, friends and family, can you divide them by “yes, and…” and “no, because…?”  How does your openness to listening and agreeing with people open you to new possibilities?