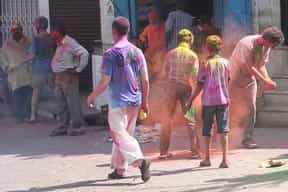 Photo “Holi in Udaipur” by Andifeelfine

I happened to see a commercial for the Banzai Color Stream Battle Blaster between SpongeBob’s (ahem—I mean, MY SON happened to see a commercial for it between SpongeBob’s…) and immediately thought of the Hindu holiday Holi (actually—I thought—wow, that’s a commercialized version of that Indian holiday where they splatter each other with different color paint–I had to research/look up the actual name of the holiday, and narrow down Hindu vs. Indian.)

By coincidence, my son and I were talking this morning about ‘cultural equivalents’ and how cultural is transfered by commercial products.  In 8-year-old terms that was how SpongeBob can be viewed in different countries, or how Japanese shows and toys, such as Pokémon, have become popular in the .

So when I saw the Color Stream Battle Blaster commercial, boasting “Color Infusion Technology”, I immediately thought of it as the ultimate, commercialized, packaged adaptation of Holi, or at least as it was described to me by an Indian-American colleague last year.