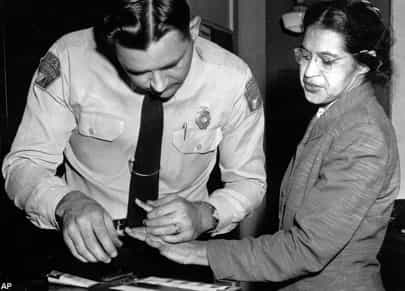 In the post “Beyond White Guilt: The Role of Allies in the Struggle for Racial Equality,” at This Week in Race blog, the authors point out sources of “latent racism, not of any conscious bigotry,” using the lesson of Rosa Parks.

“As another example, school children who were educated in the second half of the 20th century, unless they were part of an Afrocentric curriculum, likely learned that Rosa Parks was an elderly woman who was too tired from a hard day of work as a seamstress to get out of her seat on a bus in Montgomery, Alabama in 1955.” (Uh huh, I got that one right on the test…)

“Though Rosa Parks did work the day she was arrested, she was not old (42), and while she was, indeed, tired, her real fatigue was from injustice and frustration that her work with the NAACP was not yielding enough publicity for the cause. Rosa Parks was an advocate for racial justice and was participating in an act of civil disobedience when she refused to give up her seat.” (Ohhh….)

While I find the language of the article to be a little alienating “why white liberals are unable to grasp and take action to expose, challenge and provide alternatives to the racism spouted from the right” (it assigns a group responsibility and doesn’t acknowledge individual action, kind of like when people ask why moderate Muslims don’t stand up against extremists), and the concept of “white ally” to be a little counterproductive (a vision for a better world and the commitment and heart to work on it doesn’t need “permission,” as ally suggests, to proceed)  the example is right-on in terms of how we (white?) learn and understand the dynamics and history of race relations in the US.

I’m moved by this post from to ask my 8 year old son who studied this in school last year, “why” he thinks Rosa Parks gave up her seat, in an act that led to the Montgomery Bus Boycott.   As I consciously work to raise an anti-racist child, am I (or his school, society, etc.) teaching him the same unconscious bias with which I was raised?