Hopefully You Complained About Obama AFTER Your Own School Speech 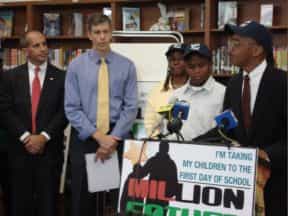 Obama’s school visit this week is very reminiscent of a program we have in Chicago, called the Black Star Project–the project is all about black male adults serving as role models for black children.  In fact, that’s Secrectary of Education Arne Duncan in the photo above in 2008 in Chicago, participating in the Million Father March coordinated by the Black Star Project (BSP), to encourage fathers to take their children to school on the first day.

In fact, BSP easily schedules over 200 visits each year to 30+ schools as part of the Student Motivation Program (mostly on the south side of Chicago, and, from experience, with mostly a 100% black student population).  Motivators talk about their own career to expose youth to different career fields and then provide a general stay-in-school or inspirational message.

Anyone can volunteer, from me to President Obama.  I always open by asking if anyone knows what marketing is (only 1 right answer in 3 years) and then proceed by flashing two cereal boxes–one for children, one for adults, and ask the kids to say what they saw.  Who’s the target market?  How did they know?  By the end of the discussion we’ve identified over 100 specific, tangible jobs in marketing, and most, unwittingly, were expert marketers all along!

My inspirational message?  Don’t let others define who you are, and if you like to do something, there’s probably a job in it (a la the Chocolate Taster Job at Hershey’s that I aspired to after a tour of the factory at age 10…it’s a real job!)  Even a young girl who playfully/sarcastically told me her favorite hobby was staring at the wall learned what an ethnographer (sort of a professional starer of sorts) does.

I’ve also followed a speaker who dropped out of high school over 20 years ago.  His career message?  Don’t be like me.  His inspirational message?  Don’t have babies.  Do they listen to him?  Absolutely.  And for some, that is the obstacle to graduation.

The point is, EVERY ADULT can and should make time to talk to school children about their career and staying in school.  The children in our inner-city public schools are not “they” as in “they” are flunking out because “they” just don’t want to learn.  No, they are John and Chantalle, Antoine, Carolyn and Maria…young people trying to stay focused and learn and get ahead in a challenging world.  You give them the perspective of your life’s learning, and a chance to think about different paths.

The Black Star Project founder Philip Jackson is very clear about its mission (which is another thing I love about it) to “improve the quality of life in Black and Latino communities of Chicago and nationwide by eliminating the racial academic acheievement gap,” and emphasizes the critical need for support from parents and communities.  But he also is unapologetic in his plea to black fathers and black male role models to step forward.

Sometimes as a white woman, I feel like I have to say “I’m not really a black man, I just play one on TV.”   But I continue to volunteer.  Why?  They asked me to.   They make it easy (honestly, I try to visit a school once a month, probably succeed every other month, but they’ll keep you marked “active” if you do it at least once a year.)

And, from a completely selfish point of view, I like being ‘the other.’ I like being the only white person at the school because of how it helps me understand and develop language around institutional racism.

So, my question to everyone who complained that Obama was going out to talk to students about staying in school, is what did you do?

When is your school visit planned?