Hey Intel, where are all the women scientists? 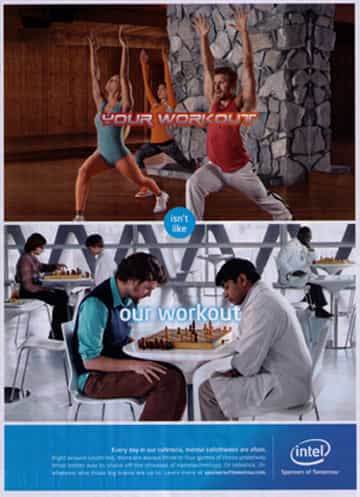 My immediate and visceral indignation at the sight of this ad reminded me a little bit of the ladies who used to take pictures of their neighbors’ trash at 5 in the morning to bring as evidence and complaint to public hearings, as in, “if I ever get to a point where I have nothing better to do than take pictures of my neighbors’ trash at 5 am, just shoot me.”  In other words, while the ad, published in this week’s People Magazine, screams a condescending “don’t you worry your pretty little head, us big smart scientists will take care of everything,” it is fairly innocuous in the bigger picture of world problems to get really upset about.

Or is it?  Isn’t the argument (that would be my argument) that images in popular media/advertising perpetuate stereotypes?  Hmm, not willing to let it slide, I thought, let me test this out on my ever willing, poor 8-year-old son, Dillon.

“Dillon,” I started, placing the ad on the counter before him.  “What’s wrong with this ad.  Wait,” I said out loud, “I shouldn’t influence you.  What do you notice about this ad?”

“Um, nothing?” he answered, clearly looking for a little more guidance.  “I don’t get it?”

“Let me try another question.  Are there more women or men scientists in the world?”

“Great, now, how many women scientists are in the picture?”

“None!”  And then he paused.  “Actually, the first thing I noticed was that he’s Hispanic and he’s African American,” he said pointing to two of the scientists.

So there are two points here: One is that they did such a great job on cultural diversity, so how come Intel had such a hard time ‘imagining’ a woman computer engineer? (and why is the woman in the front dressed like Jane Fonda?)

The second point (a la the “See Baby Discriminate” article in Newsweek last week), is that there are conversation starters about race, difference, ability and more all around us every day.  Of course I obsess that I am passing along my own unconscious bias to my child, but we both learn by talking and challenging our beliefs.

Why wait until there’s an uncomfortable moment, when you can build and teach langauge to confront prejudice, bias, and discrimination every day?