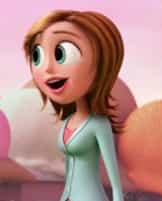 Nancy Olson as Betsy Carlisle in 1961’s The Absent Minded Professor vs. Anna Faris as Sam Sparks in 2009’s Cloudy with a Chance of Meatballs…We’ve come a long way, right?  Not really.

One of the joys of having kids (or borrowing other people’s kids) is for the excuse to indulge nostalgic yearnings by re-watching favorite childhood films.  My dad said I nearly fell off of my seat with laughter when the kids attacked the adults in  Chitty Chitty Bang Bang, and Bednobs and Broomsticks was an amazing early example of combining ‘real’ and animated characters.

For Close Encounters of the Third Kind and the Absent Minded Professor, however I felt like I was suddenly looking through the special seeing stone from the Spiderwick Chronicles, where invisible lurking dangers that were always there suddenly became visible.  For example, there are NO scientists of color in Close Encounters, and the only women are there at the end, as they prepare to board the spaceship to the unknown, presumably as breeders (my hair stylist, who is the same demographic in terms of age-middle- and race-white, but who ran with a more racially mixed crowd as a teen said “I know, my black friends never wanted to go the movies back then because of the lack of representation.”)

In the Absent Minded Professor, the Professor (Fred MacMurray) is really a benign but inexcusable potato-head who is cared for alternately by the ‘spinster’ until he finally gets married and is turned over to the ‘wife.’  The new wife literally gets up from taking stenography for the boss at her job and walks out to take on her role as wife.  She is always subservient to and/or caring for the male characters.

While Sam Sparks, the main female character in Cloudy with a Chance of Meatballs, is given independence and a career, she is still subject to a two-dimensional dilemma:  Shall she be Pretty and Dumb, or Ugly and Smart?  While the film supposedly is trying to say “hey girls, it’s okay to be smart” it does it through a lens that equates appearance with ability.

She starts by giggling self-consciously after saying anything remotely intelligent.  When hero Flint Lockwood asks why, she explains no one liked her when she was smart/ugly (as defined by wearing glasses and a scrunchy ponytail holder.)  Ultimately she chooses to go with smart and ‘ugly’, but one should have nothing to do with the other, and it never does for men!   (In this review by Todd Gilchrist on Cinematical, he says “Cloudy again teaches a valuable lesson to young girls about valuing themselves as intelligent people rather than just beautiful ones”–it’s a great review for it’s thoroughness, but why should a woman have to choose between intelligence and beauty?)

This probably would not surprise Doctor Maya Götz of the International Central Institute for Youth and Educational Television, whose 2008 study measured the representation of male and female characters in nearly twenty thousand children’s programs in 24 different countries.  According to Jocelyn Christie in her 1st installment of Kids TV Gender on kidscreen.com, the study showed that “in general, girls and women are often:

* motivated by a romantic interest

* shown as dependent on boys”

Does this mean we should go out and ban all movies until our children are 18?  Of course not.  But it does offer an opportunity to have a conversation with your child after the movie.  As in “did you like the movie? I liked the movie but I didn’t like that Sam had to choose between being smart or pretty–someone’s looks shouldn’t determine how smart they are.  What do you think?”

What are your kids watching?  Are you talking about it?

Photo credits Absent Minded Professor from movieposter.com, and Cloudy with a Chance of Meatballs from slashfilm.