My Cross-Cultural Kissing Habits May Be Getting Me in Trouble 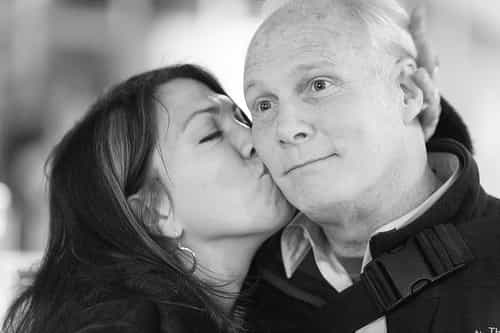 I went to a going away party for a long time colleague last night, and ran into a young man I had worked with on art installations at Chicago’s airports more than 10 years ago.  I was happy to see that his business was still thriving (I was possibly even patronizing, since I am older and he had to be in his early 20’s when he opened it) and was delighted to reconnect.  So in my enthusiasm (think of a 5-year-old excited to see his/her best friend), between hello and goodbye I must have hugged him at least 6 times.

As I was driving home, however, I started thinking.  “Oh, goodness, what if he thought I was hitting on him?”  Then I thought “was it just him, or was there anyone else that I was a little ‘forward’ with?”  I thought it through, and there was one person with whom, consistently when we spoke throughout the evening, I had stood very close, we had touched each other’s shoulders while talking, we had hugged and kissed hello, hugged goodbyes both inside the restaurant and outside on the street.

It was Gabriella…my friend who is Latina.

Ahhh, I laughed.  It’s cultural!  For me, married to a Brazilian and integrated into Brazilian culture for over 20 years, this common and abundant affection among friends is just that…warm friendship.  Kissing hello in Brazil can involve anywhere from one to three kisses.  Heck, in Paris during one visit, friends greeted each other with FOUR kisses, right, left, right left.  I thought once everyone had kissed everyone hello, it was almost time to start goodbye kisses, just to have enough time for so much kissing!

There’s the phrase “When in Rome, do as the Romans*,” but, what happens when you’re not in Rome, you’re not even Roman, and you drop a custom from another culture into your own?

Hmmm,  maybe that’s why the old timers at synagogue are always so happy to see me…

Do you have any habits that are acceptable in one instance, but might be misconstrued in another?  Do you censor yourself?  Explain?  Let it be?

*Partially inspired by this When in Rome post  from GoriGirl–answer for her…sometimes!