The Truth About Teaching our Kids About Prejudice/Racism: Sometimes We’re Speechless 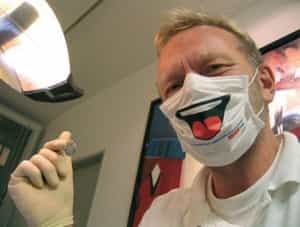 Dillon, bless his little heart, at only 8 years old had to get a root canal last week.  He had broken his tooth while playing last March, and unfortunately it had gotten infected.

But that’s not the real story.  My husband was in the room with him as the Dentist got started.  “Would you like some gas before I give you the novacaine?” he asked.  Don’t all Dentists offer that before a procedure?

“Is that the gas they used to kill the Jews?” my son, who is Jewish, asked.  Despite all reassurances otherwise, Dillon refused to let the Dentist administer the gas.

I know we’re not the only ones who have these moments.  Love Isn’t Enough is a blog devoted to ‘anti-racist parenting,’ and Stephen Caliendo talked about his experience of visiting the Lincoln Museum with his nine year old daughter, both in an edited version on Dawn Turner Trice’s blog at the Chicago Tribune, Exploring Race, and in a longer version on his own blog, This Week in Race at the raceproject.org.

Sometime’s we’re speechless because of the depth of insight from such a little person.  Sometimes we’re speechless because we’re not sure how the comment comes across to those around us.  In this case, the Dentist was the only Muslim in a practice with three other (presumably, by name) Jewish Doctors.  “Will this dentist think we are racist?” crossed my husband’s mind, as though Dillon really thought the Dentist meant to do him harm.

I imagine the context in this case is twofold:  We visited the Holocaust Museum in in Washington DC last month, and he also recently brought a book home from the library, Someone Named Eva, by Joan M. Wolf, about (per Dillon’s description, we haven’t read it yet) a blond haired, blued eye Jewish girl who gets taken from her family and adopted by a German Famly and forgets her family and that she is Jewish.

As a Jew, I felt obligated to do the former, when we were in DC.  Now, perhaps the latter, reading the book together chapter by chapter at bedtime, will give us a chance to help him process what he saw as we build discussion of his feelings and thoughts into our conversations around the book.

Just forgetting about it and hoping it won’t come up again is one way to respond, but I don’t think that works.  For me, my “MO” has been to remember what was said, think about it, and reapproach the subject when I’ve had a chance to frame the discussion.  Starting with a book or work of art as a prompt is helpful.

What do you do?  What has your child said about race that stumped you?  How did you respond?