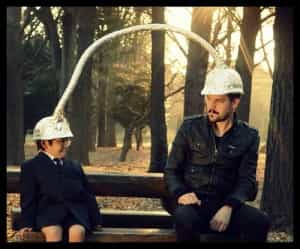 Remember as a kid trying to read your friends’ minds at a slumber party?  For my 10th birthday, it came in between “Truth or Dare” and the Séance.

Now flash forward to the future (past “Men Who Stare at Goats“), where new technology potentially could erase communication barriers caused by traditional language differences. The program, funded by the US Military’s DARPA is called “Silent Talk” and involves computer-mediated telepathy.

While I’m still with one foot in the “can’t we all just get along” phase, here’s some food for thought from scientist Dr. Edgar Lara-Curzio (and new Intercultural Talk reader!) who knows about these things:

DARPA (Defense Advanced Research Projects Agency) has been funding research to develop brain-machine interfaces. Some of these projects have been very successful.

For example, some soldiers who lost limbs in combat have regained mobility by wiring artificial limbs to the brain using existing nerves (see video below) humans also have become able to operate wheel chairs with their thoughts.  (ed. note-in this clip also demonstrates ability to convert human thought into spoken language on a computer.)

I bet it is just a matter of time before we can start communicating with others by exchanging thoughts instead of using words.

I have been asked if such communications will be in a specific language (e.g., English, Spanish). I don’t think that will be the case. Instead, I believe there is a truly universal code of thoughts that will allow us to communicate regardless of what spoken language we learned or use.

After 9/11 DARPA funded the Translingual Information Detection, Extraction and Summarization Program (TIDES) to “enable English speakers to access and understand critical information quickly. The input to TIDES systems could be speech or text, and could involve numerous languages.”

They also funded the development of Babylon “to develop rapid, two-way, natural language speech interfaces.” While the initial goal of these programs is to support national security missions, the technologies that will derive from them will eventually find their way to the market place and will be used in civilian applications.

A few years from today you will be able to use commercial tools for your work in intercultural communications that had their genesis in Babylon and TIDES.

We are at the verge of a different, new and exciting world.

Have you thought about these possibilities? How would such developments facilitate intercultural communications?