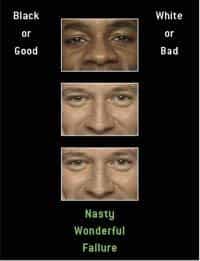 I was struck by author Malcolm Gladwell’s desicription of “Rapid Cognition” in the book blink, and how he used the example of the car salesman to show how ignoring sub-conscious ‘knee-jerk’ reactions to people can negatively impact the bottom line.  (e.g. assuming someone won’t be buying  a car strictly from their appearance/first impression.)

When we (social justice?  race studies?) talk about recognizing unconscious bias, I’ve heard some say “that’s interesting for those people who need it.”

I’ve also hosted workshops where we look at the identity of people in our circles–our dentist, doctor, hair stylist, mailman.  When some have noticed that most in their cirlce  are caucasian, participants have said, “but that’s who is near me” or “I don’t choose my mailman.”

Gladwell makes a good point as to how purposely enriching our circle of contacts can expand our implicit associations with people of different race and ethnicitiy, and ultimately change our unconscious bias.

Here’s what he has to say:

“Our first impressions are generated by our experiences and our environment, which means that we can change our first impressions–we can alter the way we thin-slice–by changing the experiences that comprise those impressions.  If you are a white person who would like to treat black people as equals in every way – who would like to have a set of associations with blacks that are as positive as those that you have with whites – it requires more than a simple commitment ot equality.  I t requires that you change your life so that you are exposed to minorities on a regular basis and become comfortable with them and familiar with the best of their culture, so that when you want to meet, hire, date, or talk with a member of a minority, you aren’t betrayed by your hesitation and discomfort.  Taking rapid cognition seriously – acknowledging the incredible power, for good and ill, that first imressions play in our lives – requires that we take active steps to manage and control those impressions.

Who’s in your circle?