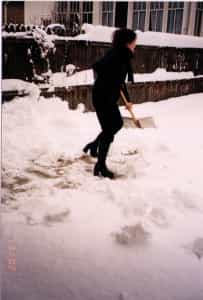 If you are in Chicago, or even worse, DC or the East Coast, as you may be cursing right now, shoveling snow for the thrid time in as many hours, only to find that the snow has magically reappeared on your sidewalk, might it help to think of the people living in warmer climates around the globe who HAVE NEVER SEEN SNOW?

Think of the wonder and amazement and ENVY they have of you right now.

In fact, in the photo above, that was Natalie visiting Chicago from Germany a few years ago, so inspired by seeing such a massive accumulation of snow for the first time that she insisted in going out and shoveling it (okay, it was a little like Tom Sawyer and the fence painting incident).  And, to use the Stephen Colbert phrase, in a “tip of the hat” to recognizing generational differences, she did it in her stylish go-go boots.  Wouldn’t have thought of that!

So, kind of like in the olden days when parents told us to eat our vegetables because there were children starving in China who would love to have them (and, now in retrospect–why China?  Ethiopia we know has had famine–talking about starvation in China, while possibly true, feels like a misunderstanding/misrepresentation of the Chinese economy?) isn’t it comforting, even fortifying to know that others would love to be in the situation of seeing snow, of having snow to shovel?

Between Natalie, a client in from Mexico (on a 7 degree weekend), a nephew from Brazil, my son as a baby–we’ve introduced snow to a few “first-timers,” always followed by hot chocolate.

Let me channel that wonderment now…is it time to shovel again?

A Primer for Brazilians on USAmerican Hospitality: The Summer Barbecue
June 1, 2015

3 Tactics for Better Communication (Gleaned from Speaking Another Language)
August 13, 2014