Brilliant Insights to US Ethnocentrism 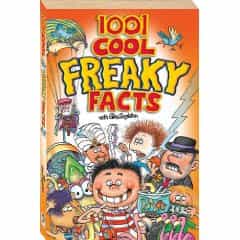 I picked up a brilliant piece of literature today that had the amazing effect of revealing my US ethnocentrism within 5 seconds.  I’m sure it’s on the New York Times Bestseller list.

You may have heard of it?  It’s called 1001 Cool Freaky Facts with Glen Singleton (Highly recommended and left on the breakfast table for my review, by my 8 year old!)

Here are some that caught my eye:

And here were my immediate, unconscious, telling reactions:

I’m sure if I asked my little sister right now if it was “just me” who (despite conscious and constant energy focused to the contrary) had such blatant, US-centric assumptions that helped to filter and organize my view of the world, she would say “it’s just you.  You’re such a X$@#$%%.”

But, tell the truth, if you are born and raised in the US, do you have any unspoken, possibly unrealized assumptions about US cultural superiority?  How will acknowelging them open you to new learning and ways of looking at the world?