The 7-Year-Old Samba Queen and Identity vs Societal Norms 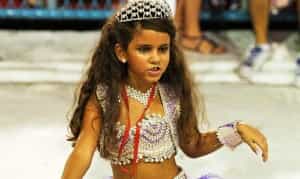 Have you heard the old joke that plays on the philosophical question about a tree falling in the forest?  You know the one… “If you’re in the forest and you say something wrong and your spouse (of course I’m going with the gender neutral version!) doesn’t hear you, are you still wrong?”

While seemingly innocuous, it does reveal a critical distinction that permeates all of intercultural communications:  What you do/who you are versus how you are perceived or judged against the norms of society.

In intercultural communications and anthropology, the idea is to give individuals and cultures hegemony, the power to exist in and of our own right, from our own point of first-person expression.

The story of 7-year-old Julia Lira, selected by her father Marco Lira to be the Samba Queen for the Viradouro School in the Carnaval parade in Rio is a case in point.

One the one hand, kids know how to samba in Brazil by the age of two…it’s part of the culture (I learned at 26 from my 3 and 4 year old nieces.)  Plus, it’s not crazy for a parent to think that their child is the best in everything.  And, as Lira says, “Any man who looks at a 7-year-old child and feels any sort of excitement should go see a doctor.”

On the flip side, Carnaval costumes are elaborate yet teeny, and samba moves in and of themselves can be seen as suggestive–I’ve tried teaching it in some of my aerobic classes in the US—our hips just don’t move that way!  (although for background, anyone can come in costume or join a Samba School and participate in Carnaval.)

While she did perform, it was nearly impossible for Julia just to simply be a little girl essentially putting on a dance recital.  Her actions cannot be interpreted separate from the history of the event which focuses on women as objects of desire.  (Or maybe it’s just that the women are gorgeous and therefore desireable—like the Neutrogena commercial… “don’t hate me because I am beautiful!”)

While serving as food for thought, writing this piece confirms why I am not wont to form a strong position about current news stories without having the facts behind the story.  While Julia may be a cute little girl, the Viadouro school apparently drew controversy in 2008 by featuring a Hitler and Holocaust survivors.  That float was ruled illegal and denied entry, but it frames the current decision as exploitative of his daughter, to gain media coverage.

In the final competition, Julia and the Viadouro school came in last.  The Samba Queen from the winning school was four months pregnant…a soon to be mom.

Maybe for next year we’ll just work on changing the norms through which women are viewed.