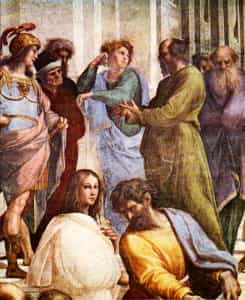 US business culture norms today are all about action and the bottom line.  “Show me the money!”

Think about it.   If Socrates were working at a corporation in the US today, with all of his thinking and pontificating, his boss might say “he’s full of baloney…what has he actually DONE?” (or more likely, “Socrates, stop blowing hot air and get back to work!”)

What started me thinking about how time period and culture change our view of things, was the NY Times article on Sunday, “A Charlie Chan Film Stirs an Old Controversy,” about sreenings of a 1968 long lost documentary “The Great Charlie Chan,” in New York in February, and scheduled again for March 16.

My first reaction?  “I loved Charlie Chan detective movies when I was a kid.”

So I was a little uneasy when I read the author’s, Pradnya Joshi, thoughts:

“For many activists, Charlie Chan remains a symbol of Hollywood’s failure to accurately portray Asians and Asian-Americans. The character was usually played by white actors who were made up to seem Asian and who spoke English with an exaggerated accent.”

On the flipside, an earlier article from a 2006 release of a Charlie Chan collection, author Dave Kehr proffers that the films were not racist, “by the standards of their time.”

That phrase, “standards of their time” rings to me of majority privilege, as in nobody got mad because it was okay in that time.  But okay to whom?  Or, was it actually offensive then too, but there was no power or place to voice that offense?

Beyond Chan’s character (and his son who talks like a typical American teenager of the time, for some fun generational contrast), more uncomfortable to me, from this clip from “Shadows Over Chinatown” (below) is the exaggerated personification of the African American butler, played by Mantan Moreland. (Indeed after years of success as a comedic actor Moreland was ostracized for demeaning representations as the civil rights movement grew in the 1950’s.)

What do Socrates, Charlie Chan and intercultural communications have in common?

We are who we are, where we are, when we are.  Feeling guilty about how we reacted to things in the past is useless. Knew knowledge and exposure to multiple perspectives allows us to integrate new insights, reconceptualize our ideas, and apply them to future interactions.

For Socrates, I’m sticking to the “great man” theory.  For Charlie Chan, I think I’ll take a deeper look, particularly at how the representations reflect the society at the time, and changes that have evolved since then.

Anything unsettling popping up from your childhood?  How do you reconcile incongruities between your former and current self?

photo credit, Raphael’s Socrates, via University of Florida Philosophy Department .  Thanks to @prpc on Twitter for link to original article.