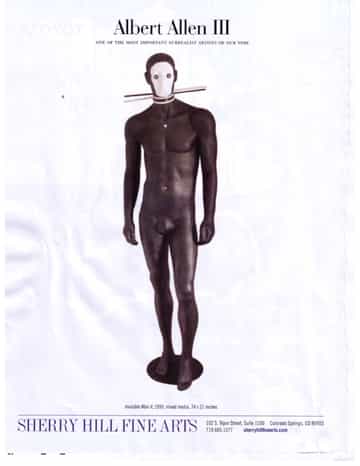 My Aunt used to stand near people at the big art shows and just eavesdrop to see what they thought the artist was saying.  Another Uncle just used to waive away all modern art as something a child could create.  And who hasn’t produced a piece of white paper and called it “Ghost in the Snow” or some such name, proclaiming it a work of art.

It’s fantastic to see “what the experts” have to say before expressing an opinion, or convenient to simply poo-poo that which we don’t understand.

In that way visiting an art gallery is kind of like Intercultural Communications.  You know you shouldn’t shout “Ewww!  He’s Naked!” upon your first impression, but without background information on intent (for art) or cultural insight (for cross-cultural communications) there’s often that fear of being wrong or unintentionally causing offense.

“Is this racist?”  was Dillon, my 8 year old son’s question pointing to Invisible Man II sculpture by Albert Allen III, found in an ad for Sherry Hill Fine Arts in an Architectural Digest magazine at the Dentist’s Office.

Seems powerful, considering the history of the image of a white man in black face.  But there’s no mouth.  Black man trying to conform to live in white world, remains voiceless?  Invisible?  Would the message be different if the artist was white or black, and why would I only think of those two options for him?  And what’s that around his neck–Dillon was reminded of a bow-tie, as a reference to a formal event, I was reminded of a noose or bondage.

Dillon’s Pick is part of a periodic series of ad analysis, observations or selections by 8 year old Dillon, a budding multiculturalist.