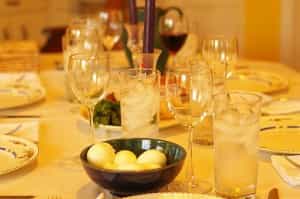 When I was growing up, every year on Passover our tradition was that my sisters and I could each invite one non-Jewish friend (aka Gentile) to join us at Seder.  It was only in reinstating that practice as an adult, did I realize there might be some angst involved on the part of the guest, when our friend called frantic four times from the grocery store to make sure she was getting the right ingredients for the dish she was preparing.

So, if you happen to be attending a Seder tonight, here are a few tips to feel right at home.

Many (most?) dinner guests hate to arrive without bringing something for the hostess, but what to bring during Passover?  Even if your host does not keep kosher, it’s best to stick with the “Kosher for Passover” mark on packages to be safe (ask for the Passover Section if your grocery store has one—in big stores that may be in a temporary area, separate from the Jewish section.)

Don’t worry about baking something 1.) Because “Chometz”–anything that when mixed with water that can pass for a leavening agent is forbidden (e.g. yeast, flour, oats, barley, spelt and rye), except for Matzo, and 2.) In “really” kosher homes there are rules about which dishes you use and what food items can touch which dishes (some will have three sets of dishes/cookware:  one for milk, one for meat, and one just for Passover.)

Eat before you come.

Not really, there will be a huge meal after the Seder, but remember even the kids haggaddah that jumps right to the key activities will take an hour—a traditional Seder in Hebrew can last six hours!  So if you are invited for 6 pm (Sundown), assume you won’t be eating until after 7.  Plus there are either four cups (by ‘law’) or four sips (by practice) of wine during the Seder, so if you get tipsy easily on an empty stomach, have a little “nosh” beforehand.

Do not drink the wine from the Cup of Elijah

Although this was a favorite trick as a teenager, when no one was looking, to drink from the extra cup of wine set for the Prophet Elijah (look, Ma, it’s a miracle!), don’t do it at your Seder.  By tradition, the wine is poured and the door opened in the hopes that Elijah will join you at the table.  The belief is that when the prophet Elijah comes there will be peace on earth.

This tip is right up there with don’t eat the Afikomen (the “dessert” Matzo that is hidden for the children to find), but if you give the child who finds the afikomen an extra $5 or $10 prize–you will be the favorite Seder guest for years to come!

Passover celebrates the gift of the 10 commandments, the belief in one god, and the liberation of the Jewish slaves in Egypt under Moses’ leadership (the flat Matzo is the symbol because the Jews didn’t have time to allow the bread to rise in their haste to flee).

It’s a holiday to celebrate freedom, but also to remember and pray for those still enslaved around the world today.