This is Not Your Mother’s Airplane Ride 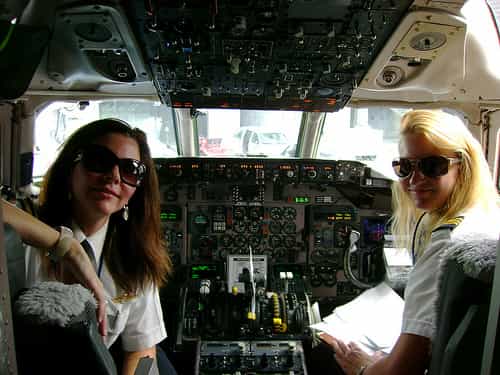 “Welcome everyone, this is your Captain speaking,” came the female voice over the announcement system during my flight to Seattle last week.

I took pause for a moment.  Having set up speaking engagements at grade schools for Women Commercial Pilots during Women’s History Month when working for the Chicago Department of Aviation, I was surprised when hearing the voice to realize this might be the first time I had actually flown with a female pilot.*

For the rest of the flight, a male voice took over the announcements.  My internalized, unconscious, chauvinistic inner voice thought—did she get relieved of her post?  Did they think a male voice would instill more confidence in the passengers?

Of course I shamed myself for thinking such thoughts, and just asked the male flight attendant as he passed.

“United Airlines has one of the highest numbers of female captains.  In fact,” he continued.” I’ve flown when the pilot and co-pilot have both been women, and all of the flight attendants have been male.”

As we reached our destination, the pilot’s voice returned, letting everyone know it was time to prepare for landing.  It was then I realized she had just delegated the announcements during the flight.  After all, she was in charge.

What roles have you seen expanding for women over the years?  As a woman, have your own expectations for yourself evolved along with the growing opportunities?  What unconscious bias might you carry from years past (and is the double standard still a thing of the past in terms of a “woman’s job” and a “man’s job?”

*People to whom I’ve told this story have expressed surprise at the novelty of my flying with a woman pilot, but the numbers are revealing.  According to 2007 statistics, only 6.17% of all commercially licensed pilots are women.