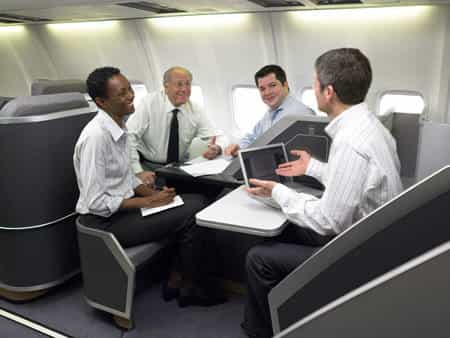 My colleague was conducting a training during a “train the trainer” session this week on Intent and Impact, the idea being that in communications, sometimes our Intent does not equal the Impact we intended.  For example:

“That sweater you’re wearing is really interesting” (intended as compliment).  Unexpected impact:  “You hate it don’t you?” (Spontaneous reaction:  heard as a catty, back-handed insult.)

The idea in that case to help maneuver out of that moment of discomfort is to assume positive intent on the part of the speaker, and use it as an opportunity to ask for clarification before jumping to conclusions.

Sarita, who is a brilliant, vivacious woman of Philippine and Pakistani descent, then went on to share an example of when she had used this approach.

“I was traveling back to LA after conducting an out of town training, and I had been upgraded to First Class.  I was sitting next to a businessman, who was Caucasian, and we started chatting.  He asked me if I traveled in First Class often….”

She continued, saying they talked about what she did (intercultural communications training), were discussing business and getting along famously when he said, “You know, if I close my eyes and just listen to you I don’t even know you’re a minority.”

Sarita started to break it down for the train the trainer group, and explain how she chose to try to diffuse this, but the rest of the group stopped her.  We couldn’t justify under any condition that this gentleman had ‘positive intent.’

That said, I do believe this gentleman thought he was paying Sarita a compliment.  Unfortunately he was doing it through an ethnocentric, privileged lens.  In essence he was saying “people of color can’t achieve success in their own right, only in how well they do something compared to how a white person would do it.”

Ignorance may have been bliss 50 years ago, but not anymore.  Want to keep up in a global, multicultural world?  Better brush up (or get started) on knowing your own culture is just an option.  An option among a plethora of successful, thriving cultures around the world.

Perhaps Sarita could have responded by politely giving him a copy of Peggy McIntosh’s “White Privilege:  Unpacking the Invisible Knapsack.”, with the added point: “I can, if I choose to, sit in First Class without being asked how I got there.”

What do you think?  Have you been on either end of this conversation?  How have you responded?