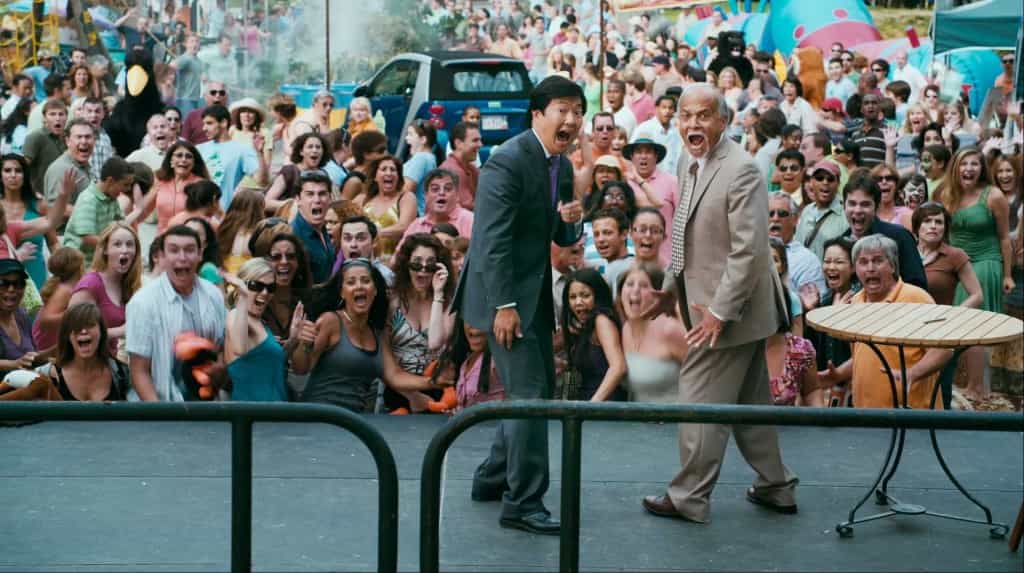 Remember the 1958 film The Blob, with its big red amorphous goo rolling and taking over the town, absorbing the minds of young people who were not strong enough to resist?  Of course the “BIG RED BLOB” was none too subtle a reference to the Red Scare and fear of Communism taking over the US.

Russia’s our friend now, so in Furry Vengeance, it’s the big bad Asian and Indian business people who heartlessly come in and tear up our natural resources and values in the name of the almighty dollar.  When I pointed this out to Dillon (okay, I should have waited more than 3 minutes after the movie ended to point out my theory) he said exasperated, “can I just enjoy the movie first?”

But the stereotypes were just too over the top.

With the Asian-American businessman, Neil Lyman of Lyman Industries (played by actor Ken Jeong), he’s obviously USAmerican, and his role has nothing to do with being of Asian descent, and yet he inexplicably goes into some sort of Chinese, Japanese, Karate, English Gibberish rant when enraged, as in “aii yaaai yowie you stew-peed.  He then ads some fake karate tae Kwan do preparation moves in defense.

The Indian investors are fairly quiet, but when Brendan Frasier as the dad makes his impassioned plea “if you sign you’ll kill all the baby animals” Lyman counters with “but you’ll make oodles of money,” to which he completely unaffected says “give me the pen, where do I sign?”

Finally, in a purely gratuitous swipe at the elderly, the only character in the entire movie over 40 is constantly forgetting what she is saying and trying to get everyone, including even the raccoon, to paint pine cones.  Clearly there are no OLD PEOPLE in Utopia.

So maybe I’m overreacting, I thought.  What did others think?  In the blogosphere—right there with me on the awful stereotyping.  On the more mainstream media—only one star, but mostly for simply not being that funny.  And then I read the Chicago Tribune movie critic’s review:

“A bit player exaggerates his Mexican accent, and the Korean American doctor-turned-comic Jeong bursts into shrill, sing-songy Korean chatter on his cell-phone. Kids are never too young to find foreign languages funny.”

Thank you, Mr. Movie critic, for pointing out kids are never too young to mock other cultures and laugh at racist stereotypes.

Well, at least they may take away a positive (albeit 2 dimensional pound-you-over-the-head-with-it) message about protecting the environment.

Oh, and my 9 year old son liked the movie–there are potty scenes and skunk scenes and getting sprayed with water to look like you just did youknow what…all around general humor that will appeal to a child.

Oh, and we’re still talking about it and how cultures are represented or stereotyped in film almost a week later.

So, in the end, perhaps the laugh is on those who created the stereotyped characters in the first place.

What movies have you seen lately?  How do you balance letting your child enjoy it, while also opening discussion for learning?