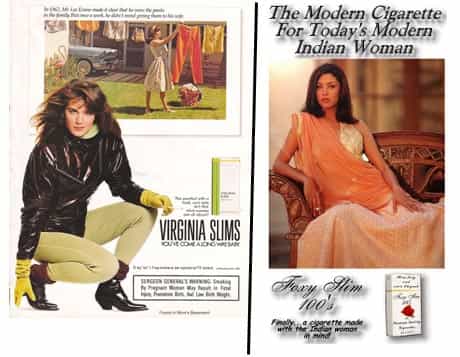 I definitely smoked Virginia Slims when I smoked 30 years ago.

But who wouldn’t want to be that tall, thin, confident, brave, free-spirited, adventurous woman who didn’t take sh— from anybody.  Sign me up!

Without even inviting me to a focus group tobacco companies have taken note, creating advertising targeted at women in third world countries.  According to Douglas Bettcher, a World Health Organization expert, the tobacco industry is selling cigarettes “using stereotypes such as associating smoking with women’s liberation, the kind of stereotypes featured in smoking promotions decades ago in the rich nations.”

WHO presented a report late last week on tobacco use and women in anticipation of world anti-tobacco day on May 31.

As cigarette advertising laws in the US have become more stringent (you won’t find Joe Camel around anymore), tobacco companies have turned to new horizons.  Of course in the US it’s because we know that smoking kills.  According to the American Cancer Society, “each year about 443,600 people die from illnesses related to tobacco use.”

Whose job do you think it is to design “pink packs of cigarettes…aggressively promoted to attract girls” or  cigarette packs “resembling a perfume containers,” to get little girls in foreign lands to take up smoking?

In the spirit of intercultural appreciation and respect, I am going to go buy my 9 year old a pack of cigarettes.  Well, that’s one way to look at it, right?