Sascha Finkelsztajn’s Jewish Deli in Paris: Who Has the “Right” Jewish Sandwich? 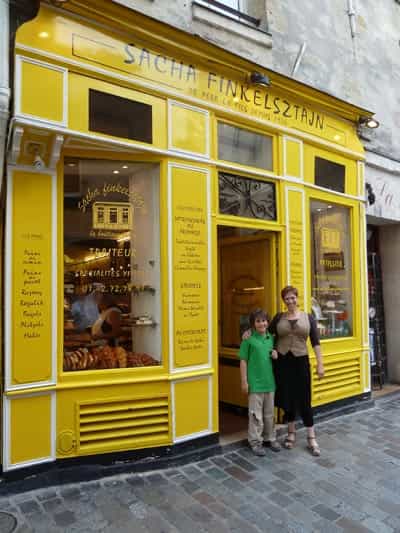 The traditional Jewish sandwich is a corned beef on rye, right?

It was actually our (not Jewish) Parisian host who told us about Sascha Finkelsztajn’s.

Having been to a Jewish seder in Brazil and with a nod to his burgeoning Jewish cultural identity, 9 year old Dillon said it would be fun to try a bagel in Paris.    Bernadine excitedly told us about Sacha Finkelsztajn’s in the Jewish quarter (27 Rue des Rosiers).

“I love it there, they have the typical Jewish Sandwich!” she exclaimed in French.

“Corned Beef on Rye?” I asked in English.

“Oui,” she confirmed.  “And they have that traditional Jewish bread!”

“We have to go there,” shouted Dillon at the prospect of combining his zest for exploration with his passion for all things edible.

While in New York the typical Jewish deli sandwich is corned beef on rye with mustard, in Paris it turned out to be pastrami on bagel with eggplant and red pepper spreads.

And the bagels were sort of…braided.  “Isn’t that cute,” I thought.

In retrospect, we wanted to see the French traditional bagel to see how it compared to our’s in the US…with the unconscious assumption being that OUR’s was the right one, and this “foreign” one was the adaptation.

The more accurate comparison might be the evolution of the bagel–Sacha’s grandparents Dora and Itzik came from Poland in 1930 and opened the shop in 1946.  Leo Rosten, in “The Joys of Yiddish” credits the first printed mention of the bagel to Krakow, Poland, in 1610.   Maybe this French bagel is the “real” bagel, having come straight from the source.

Sacha himself may not care, as he sits in the back at the cash register and a steady stream of customers from all over continues to line up and order.  At one point while conducting our business in French we discovered I was from the US, my husband Brazilian, the young woman making our sandwiches Polish, the person behind me in line a relocated New Yorker.

For a minute I wanted to say well what the heck are we all doing speaking French?  But then you realize it’s because you’re in Paris.

How authentic are your authentic traditions?  Who owns the “real one,” when they spread around the globe?