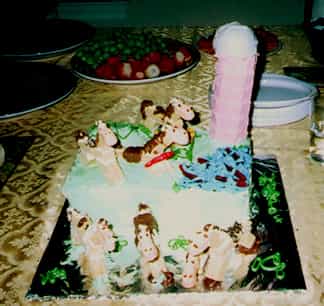 I have to tell you in all honesty that my 9 year old son and I made this birthday cake for his dad/my husband with all the love in our hearts.  Sergio always says he wants to retire on a farm so we chose a farm theme, and inspired by the amazing book “Hello Cupcake,” set to work to create this amazing farm scene, complete with horses, a small pond with fish, and a silo, made of inverted stacked ice cream cones topped with one of those snowball marshmallow cakes, and covered in icing.

Not according to the guests who came to the birthday party that night.

Now, for a quick sociological analysis of this study, to see if there is any trending of perceptions based on sexual orientation or gender.

Overall, of 21 people total 33.3% of the people attending the party were so moved upon seeing the cake as to approach me and say “so, what’s up with the cake?”

The lesson for intercultural communications?

1.  Not everyone sees things the same way.

2.  Once someone shares with you his or her interpretation of or orientation to an object, idea or concept, you will never be able to look at that item the same again.  Your perception is forever changed by learning that of another.

3.  Just as diverse teams can improve the bottom line with a more productive work place, a diversity of backgrounds and perspectives will make your party more fun, too.

What does this look like to you?  No need to answer in writing, but if you do, please include your sexual orientation to add to the data collection.