The Race Test: I am White 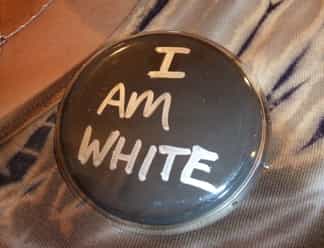 White Tim White talks a lot about White Privilege, White Peggy McIntosh is well-known for “Unpacking the White Knapsack” about what it means to be white, and most recently, White Mikhail Lyubansky, professor of Psychology at the University of Illinois, takes a stab at the notion in his article on psychologytoday.com, “Going Where Glenn Beck Refused to Go:  Defining White Culture.” In the article, Lyubansky refers to “Thandeka’s Race Game,” a game she shares in her book, Learning to Be White, after a white colleague asked what it was like to be black.

The Race Game, as my luncheon partner very quickly discovered, had only one rule.  For the next seven days, she must use the ascriptive term white whenever she mentioned the name of one of her Euro-American cohorts.  She must say, for instance, “my white husband, Phil,” or “my white friend, Julie,” or “my lovely white child Jackie.”

But this one didn’t seem to feel right for me–maybe because it would be my “Brazilian husband,” or my “Asian colleague.”  Or maybe it’s because I’ve long been sensitive to attaching racial qualifiers to anything–you’re not a great “African-American Artist,” you’re a great artist who’s African American.

What seemed more at the heart was the dichotomy set up by majority culture…There’s white, and then there’s everything else.  I notice that you are black or Hispanic, but no-one ascribes a label to me, because I’m white.  It’s like why colorblind doesn’t work–WHITE can be colorblind because no-one notices your color.  But for a person of color, no-one lets you forget it.

So I wore my racial identity on my chest.  Literally, with my “I Am White” Button.

Here’s what I noticed day one:

1.  The first person who saw it was my banker at the drive through, a young woman I have labeled Hispanic, who asked what it was, thinking that the person she’s known and been nice to for years was actually a white suprematist.  When I explained my game, she said “Oh, I thought it was because of Arizona, you know with everything about Immigration there now.”  Dillon only got one lollipop instead of the usual five, and I was left fearing I would get beat up before the end of the day.

In the absensce of defining or claiming white culture, what is white is being defined for us.

2.  I made a new best friend at the coffee shop where I was meeting for work on the Hyde Park Jazz Festival today.  After a minute or two she said, “alright, I have to ask, does that say ‘I am white’?  The people at the next two tables chimed in once she mentioned it.  I explained the game, and why I was wearing the button, and she (African American) said “Your right!  I do that all the time…I say “my white friends, or my “crazy friends” or my “black friends..”

Wait, I thought, you’re doing it wrong!  Only white people are supposed to use racial qualifiers…you do it too?


3.  I felt really self-conscious all day, and on a couple of occasions actually hid my button with papers when someone I knew walked by (nice that I can just hide my racial identifier when I want to).  My last stop of the day was the post office, and both of the gentlemen behind the counter asked,  one with an immediate “I am white…what is that about?”

I again explained that as a white person in a majority white culture, I didn’t have to wear my race on my sleeve…but that my understanding from the field, from blogs, etc. was that for people of color, they were more conscious of their race all the time.  And that’s how I felt most of the day, almost ‘palm-sweatingly’ hyper-conscious of my white race.

“It’s not that I’m conscious of my race (black) he said–I don’t think about it at all.  It’s that I hear something.  Someone will say something, and that’s what brings it to the forefront.”

What do you think?  What would you say if you saw the button?  Or, wear one and let me know what happens?