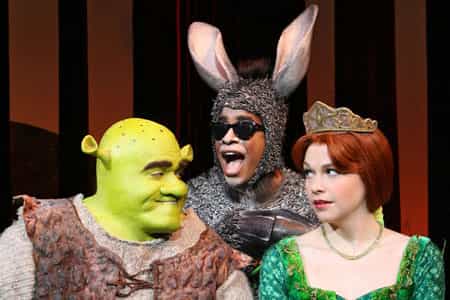 Dillon came home from a great field trip last week with Northlight Theatre Camp to see Shrek the Musical, presented by Broadway in Chicago at the Cadillac Theatre in Chicago.

“How was the play, I asked?” mostly thinking it was a cute and innocuous attempt by Broadway to engage younger audiences (although I heard gasps of mortification when “Spiderman:  The Musical” opened on Broadway in New York last January).

“It was good,” he answered, a pretty inane expected response from a nine-year-old.  “But it had a really bad stereotype,” he continued.  “Donkey was the only African -American actor, and he cussed, used bad words, and bad grammar.  And he was the only one who did it.  It was really stereotpyed.”

In watching the movies,  Donkey (or “Ass” as Shrek affectionately called him once or twice) was played by Eddie Murphy.  I never noticed the stereotype.  It was just Eddie Murphy just being…well, Eddie Murphy.

But Dillon’s immediate perception had me looking in the program book, and, indeed, the Donkey character was the only African-American actor.  And the only character, literally, making an ass of himself.

Do you stop and call the theater?  Set up picket lines in front?

Of course not.  But do you give your child a hug and think “maybe he is actually listening to me?  Absolutely!

Unconscious bias is formed over time by repetition of stereotyped roles, that kids absorb daily from TV, books, others around them.  Doctors are White.  Robbers are Black.  Shrek, white, is kind, caring and insightful.  Donkey, black, is loud and uneducated.

For my generation we took images in media as universal truths.  For Dillon’s we break down stereotypes to see how they divide and alienate, and use that dialogue to as insight into creating an inclusive society that starts at home.

I just didn’t realize he would be smarter and more perceptive than me so young.