Guess My Race? There’s an App for That 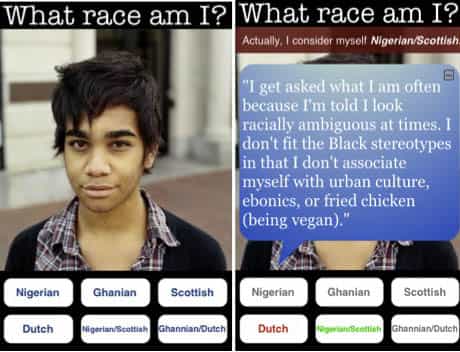 If TS Elliot said “if I had more time I would have written a shorter letter,” then I say if I had been more brilliant I would have invented a simple and accessible application to teach about the depth of cultural differences and race in a way that immediately makes you aware of your unconscious bias and assumptions and say “ooohhh….”
Oh wait, someone did that!  It’s called the Race Awareness Project, developed by Dr. Michael Baran, who integrates anthropological and psychological research and culls it into activities, games, books and applications to inspire dialogue about race for all ages.

The goal is to make widespread some of the fascinating anthropological, historical, psychological and sociological insights about race – how race developed, how race is historically changing, and how race affects our everyday lives as it intersects with other categories of identity such as ethnicity, nationality, religion, and gender.

Baran’s newest materials are two interactive apps for iPhone/iPod Touch/iPad users, one geared to adults and one for kids.  “I’ve found many parents promote the ‘color blind’ approach to race, rather than  talking to their kids.  Hopefully this fun “guess who’ kind of game can start a dialogue that will extend beyond the game itself into day to day interactions,” says Baran.

The “Guess My Race” app (you can try a sample presentation of it here in pdf format) will break you of any unconscious labeling habit after the first minute, as you guess how people in photographs would answer the question “What race are you?”  Following your guess you will find out how the person self-identifies, plus you’ll get some historical and cultural facts related to identity.

The kids counterpart, the “Whom Am I? Race Awareness Game. is designed to open a dialogue about human physical diversity and racial identification between children (3+) and parents or caregivers.”

The games were developed by Dr. Baran and produced by Michael Handelman, Director of Playtime Interactive. The photographs in the apps are by Ruthie Brownfield.

Both Guess My Race and Who Ami I? Race Awareness Game apps are available at the iTunes Store.

The apps are only $0.99 each–that’s less than $1.00 to get started on making the world a more warm and embracing place.

Hmmm, pack of gum, or world peace?  Which one will you chew on today?