90% of Hispanics in US Have Never Carved a Pumpkin 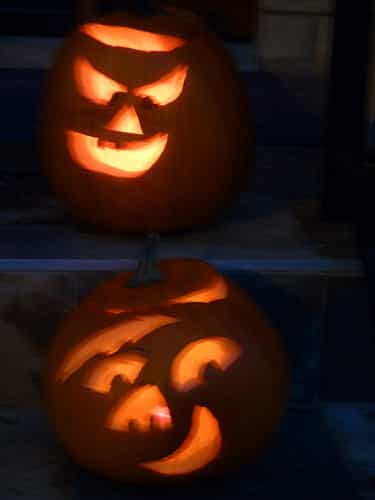 This is a story about pumpkin carving.  Or is it really a story about jumping to conclusions and applying generalizations too quickly?

The scene was last Friday at a friend’s party.  One of the guests, Steve (Causasian) said “hey, let’s bring pumpkins and make Jack-o-lanterns!”

“Yeah, let’s do it” I echoed, a fellow (Caucasian) pumpkin carving lover.

Steve, an architect, ditched us at the get-go.  When he saw us traipsing down the stairs with table cloths, only 2 scoops, one knife, and six children, two of them under the age of five, he absconded to the kitchen, bringing his secret stash of carving tools with him.

That left me and Dillon, Carolina (Hispanic) and her four daughters, and Victor (also Hispanic) and his son.  We set the kids up, carved circles in the tops for the opening and dug in.  The kids started enthusiastically, pulling out handfuls of seeds and slime and showing them to each other menacingly.

At some point, however, all of the children decided to watch a movie, leaving the three parents alone to finish the nasty job of scraping the walls on the inside of the pumpkin.

“HELLO,” I thought as I smiled to myself.  This moment of abandonment is actually part of the tradition!  As is the moment of thinking (or perhaps lamenting outloud) Why the X#$%#@$ are we doing this anyway?

“I’ve never done this before,” said Carolina.  “Maybe this is why.”

“Me either,” added Victor, whose son also had left to play. “This is hard work.”

“It gets better,” I assured them.  Having made Jack-0-Lanterns as a kid with my dad, even holding a Jack-o-Lantern carving party in college, and religiously doing it with my son since he was three, I couldn’t believe they had never carved pumpkins!

“Hmm,” was my immediate thought.  “Maybe Pumpkin Carving is just not done in Hispanic culture?”

And then, you realize your pumpkin is clean enough to carve.  You cut out an eye, stand back, and think, hey, this looks kind of cool.

Your child senses it and comes back and wants to help.  But now it’s YOUR pumpkin.  “No you say, the knife is too sharp.”   But really you’re thinking “I don’t want some kid messing up MY pumpkin.”  Fully taken over by pumpkin carving fever, these were now our pumpkins.

One of Carolina’s pumpkins won the contest (even considering that Steve brought his pristine specimen to the basement for the competition), and our hostess, Janie, Filipino and also a “Pumpkin Virgin” (oh, I guess Filipino Americans don’t make Jack-o-Lanterns either) declared this an annual event at her home!

On Halloween, as I admired our handiwork (pictured above), I was still left with a curiosity about how Pumpkin Carving played out across USAmerican culture.

Turns out carving Jack-o-Lanterns originated from an Irish Myth (read it here on the History Channel) that came to the US with Irish and Scottish immigrants.  Originally made out of turnips, potatoes or beets in the ‘old country,’ pumpkins were found to be the perfect material in the US.

And while not born in Latin America, there’s no corroboration for my theory that Hispanic Americans do not carve pumpkins.

Know why the rhetoric was so annoying this election season?  Because many took a look at the actions of one person and declared it as the habits or characteristics of an entire group.  Democrats do this.  Republicans do that.

My pumpkins are a benign topic (and hopefully I’m getting invited back to next year’s pumpkin carving event!), but noticing how quickly I jumped to a huge assumption about an entire cultural group because of this one coincidence–well, now that’s scary.

What about you, do you carve pumpkins?  Or better, do you notice your unconscious conclusions, and the assumptions or stereotypes that got you there?

Cultural Adventures to Connect with your Teen
November 13, 2015