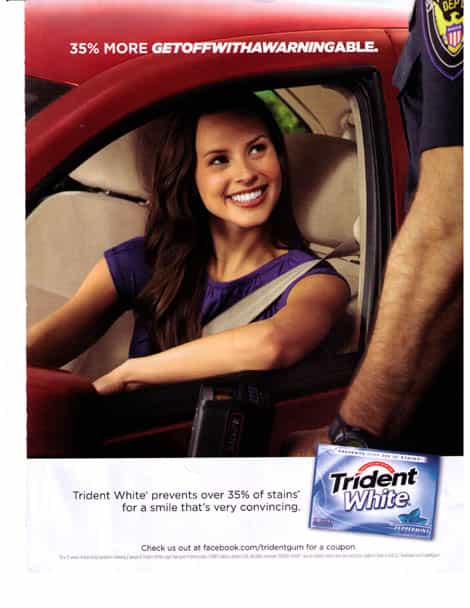 (this post originally ran 5/4/10, but I always thought the re-imaged photo at the end was under-appreciated.  Hope you enjoy it)

So from this ad am I to understand that if I chew Trident Wite I’m 35% more likely to get out of a speeding ticket?

Is that only true for beautiful white women?  What if I’m a black man?

Actually, according to KJ Novak in his article “Disparity and Racial Profiling in Traffic Enforcement,” “Minorities are significantly less likely to receive formal sanction than majorities, suggesting officers are using traffic violations for pretextual stops.”  In other words, blacks may be less likely to get a ticket if pulled over, but that’s because statistics show that so many more blacks than whites are pulled over due to racial profiling.  (Hence the phrase DWB…Driving While Black.”)

I will not deny getting out of a few tickets in my day, but this ad seems poorly thought out–ultimately aimed at a narrow, privileged few, while potentially alienating many.

Am I wrong?  Would the ad below work too?

The photo above is from a 2006 article from the London Evening Standard about an black man, Edmond Taylor, who was convicted for a traffic incident, even though the white culprit was caught on video.  Taylor was eventually cleared.  Maybe it would have been quicker if he was chewing Trident White?