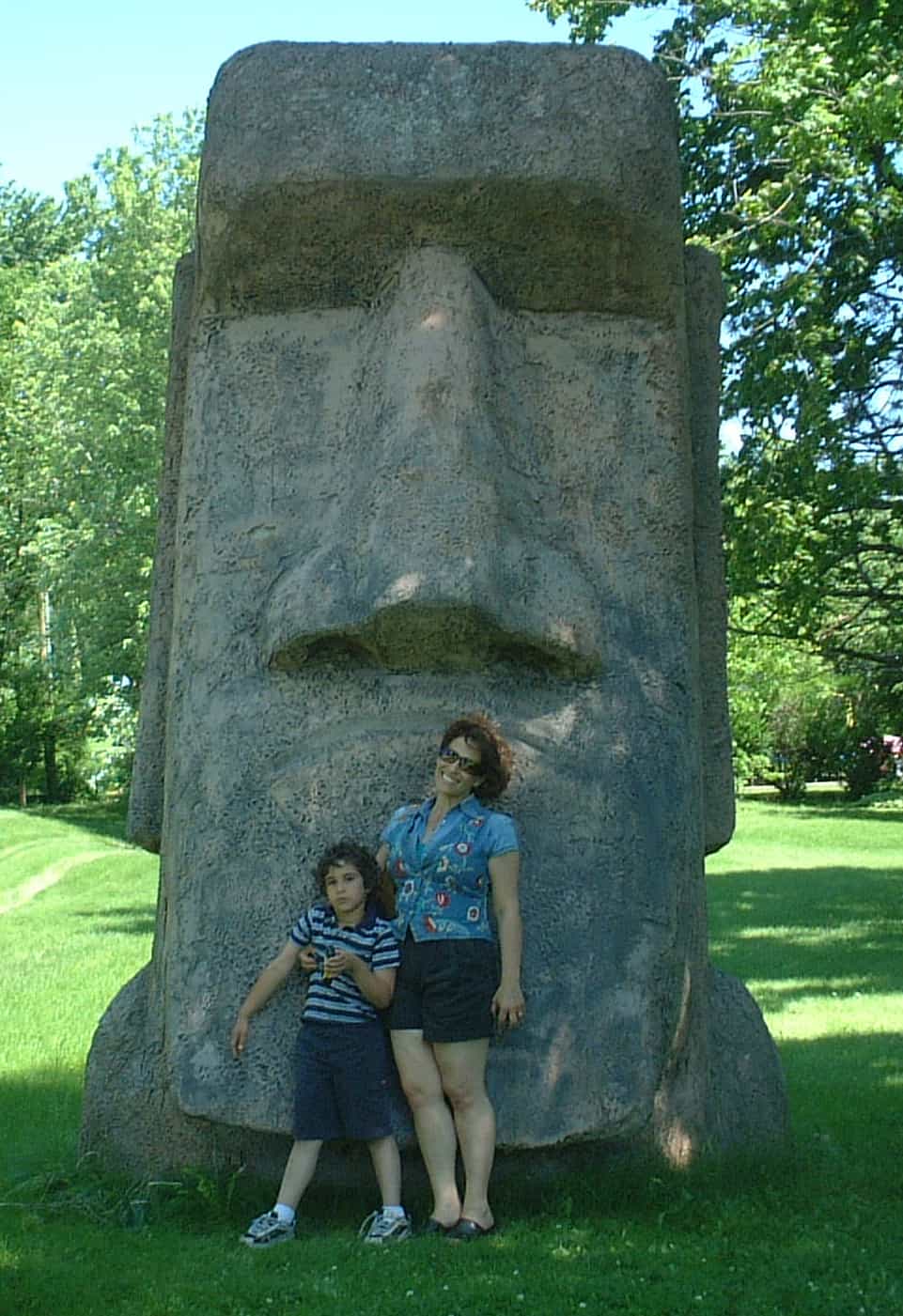 Dave Barry was always able to just take vacation and run old columns.  For me, I’m entering a new world that is based in economic disparity and developmental disabilities–absolutely at the top of the engagement and inclusion/social exclusion list, but new territory that hasn’t quite gelled.  So in the meantime, I’m periodically re-running posts that were personal favorites.  After all, how can you not love a FULL-SCALE replica of an Easter Island Head, on someone’s lawn next to the Wendy’s in a little town in Wisconsin…

(from June 25, 2008)  I’ve been pondering this issue of “Cultural Tourism,” and realize that the better term for what I am talking about, experiencing and appreciating other cultures in a way to diminish prejudice, is more accurately named Urban Anthropology.  A tourist, by definition, is “someone who is traveling for pleasure.”  It is a passive view from the outside, with no commitment to learning or change, hence the perhaps valid criticism of it’s ineffectiveness as a meaningful tool to combat racism.

Urban Anthropologists, on the other hand, “look at how people living in diverse communities cope with current social and cultural changes.  They study the kinds of social relationships and patterns of social life unique to cities.” (per Rosa Cabrera, Center for Cultural Understanding and Change at The Field Museum.)  Plus, anthropologists get to do “ethnography” and “participant observation,” where they become part of the ‘culture’ they are ‘studying’ and participate in activities along with the culture they are observing and learning about.

It’s along those lines that my son L and I took off with another of his 7 year old friends on a road trip from Chicago to Ephraim, WI, to see the Norwegian Fyr Bal festival and experience what I think of as real “Americana.”

We saw a statue of Romeo the Killer Elephant in Delavan, WI (according to roadsideamerica.com he trampled 8 people to death but was spared because he was sad after the loss of his female companion, but the statue in town square just identified him as a symbol of Delavan’s history as the Circus capital of the Midwest in the late 1800’s), we then saw an exact, full-scale replica of an Easter Island head on someone’s lawn in New Berlin, WI, where we also happened upon a rummage sale with Pokemon Cards on sale for 50 cents, had Ice Cream Sundae’s in Two Rivers, which claims to have invented them, and took our picture with the World’s Largest Grandfather Clock, before settling into Ephraim for the fish boil and bonfire ceremonies that are a tradition for this festival (we stayed at the Trollhaugen Lodge, which of course had statues of trolls all around, and had breakfast at a restaurant with goats on the roof-real, live goats who graze on the grass covered roof of Al Johnson’s Swedish Restaurant).

You have to really like this type of thing to thoroughly relish stretching a four hour drive into eight hours, with all of our stops and using the county highways and side roads (wind surfing with your hand out the window while speeding through farm fields along a two-lane county highway is pure freedom!).  At any rate, this is a polite way of saying it was just me and the boys, because anyone else might spontaneously combust.  Granted, I planned the trip out, had detailed directions from AAA, knew we would only drive during the day, and had covered basic safety issues, but other than that had no apprehension that we would not be welcome or that we would face any safety concerns out of the ordinary. And my expectations along those lines were fully met.

Which makes me wonder.  Is this a universal experience, or is the fact that I am fearless throughout this entire trip an indicator of my white privilege?  I’m left with a nagging feeling it is–the idea that as a white person I can go anywhere.  But what am I saying if I believe minorities should be afraid of taking this same road trip?  I set out to discover true Americana in small town America, but am left wondering if that is an oxymoron, and if this was at the end of the day, completely ‘white’ Americana not only showing the divide in our day to day experiences, but also acknowledging the deeper need to understand our possibly separate experiences of growing up in the same country.