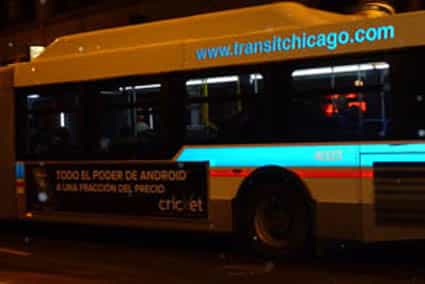 When I saw the Cricket transit ad, “Todo el Poder de Android a una Fraccion del Precio,” I knew it said “all the power of Android, at a fraction of the cost.”  But as I looked around me—on a busy corner of downtown Chicago during the after-work rush—I wondered how many others did.  And if they didn’t know what it said, wasn’t that a waste of good advertising dollars?  Placing an ad in Spanish in the middle of downtown Chicago, what I would think of as general market?

First, a note on my underlying assumption here about the number of Spanish speakers in Chicago (I assumed low, hence not a worthwhile expense).  As it turns out, the number of Spanish speakers in Cook County matches the number of English only speakers:  each represents one third of the total population.  That said, just because one can speak Spanish, doesn’t mean one does.  The 2000 Census showed that while one in ten households spoke a language other than English at home in IL, half of those also identified as speaking English—meaning that only 5% of the total population actually didn’t speak English (with Polish and Spanish being the top alternatives).

Second, a note about research:  you get what you ask for.  What started as a curiosity about effective multicultural marketing turned into a question posed on Facebook:  “If you don’t speak Spanish, how do you feel if you see a Spanish only ad in general market (e.g. during prime time TV or on a bus billboard.) If you do speak Spanish, how do you feel?  Asking for feelings, the conversation that ensued reflected positions on the essence of USAmerican values:  immigration and assimilation vs. free market capitalism.

Ken said seeing an ad in Spanish might dissuade him from buying that product. “…It comes down to the strong belief that if a person immigrates to a new country, they should be fully assimilated by striving to learn the language and culture.” He adds that “If we provide information and advertisements in a different language, then what is the incentive to be part of the USA culture?”

Michael countered, however, that “Business has to do what it must to reach its market.”  Jennie agrees.  “Ads in Spanish are capitalism in action…and ain’t that America?”

On the topic of pure capitalism, Verizon cites the powerful market potential in diversity:  “The estimated purchasing power of African-Americans, Asians, Hispanics, gays and lesbians, and people with disabilities will be more than $ 2.5 trillion by 2010.”

Why refer to Verizon?  Well, that brings us back to the original question as to whether the Cricket Ad in Spanish on a bus in downtown Chicago was actually effective or a good use of dollars to reach the Hispanic market there.  In moderating the conversation on Facebook, I shared, from memory, that the question was inspired by a Verizon cell phone ad.

I remembered it was a cell phone ad.  The ad was in Spanish.  Therefore it must have been Verizon, right?  That’s because in my mind, Verizon “owns” the Hispanic market in Chicago.  “We speak customers’ languages and participate in the celebration of their lifestyles’ cultures,” says Verizon.  And, indeed, you will see Verizon as a sponsor at the International Latino Film Festival in Chicago, you can make free international phone calls from their booths at Chicago festivals, and meet their leadership on boards of Hispanic and Latino related organizations.

In a world where one can be friends with their Mayonnaise on Facebook if they want to, Cricket’s fly-by-night ad, while in Spanish, does not go the extra step to actually engage with the target market where they are.  Ultimately, this Spanish language ad in general market ends up speaking to neither:  it misses the connection to the former, while potentially alienating the latter.