Hidden History: When Culture Gets Removed from Tradition 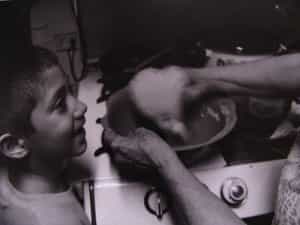 My husband and I have skirted this conversation for 24 years.  Not really skirted.  For us, culturally Jewish (me) and Brazilian (him, non-Jewish) we are comfortable with our choices to raise our son Jewish, and make sure he is well connected to his Brazilian heritage, despite growing up in the US.

We’ve survived my Grandmother whispering at the top of her lungs “too bad he’s not Jewish,” after we were married, and after he had just changed a flat tire on my uncle’s car to save us waiting 4 hours for AAA.

We laughed through my mom pointing out that Sergio’s mom’s maiden name, Perreira, was the most popular name for Jewish families escaping the inquisition in Portugal and fleeing to Brazil in the 1500’s.

We really laughed when the US government issued him a citizenship certificate changing his last name to Bonastein (instead of Bonaventura) when he became a citizen years ago.  “See, even the US Government wants you to be Jewish,” we joked.

But it was the conversation at dinner the other night that really gave him pause.

Our son Dillon was contemplating becoming vegetarian and discussing the care of chickens, factory farmed versus free range, when Sergio spontaneously announced, “My mom used to drain the blood from chickens when she prepared them.”

That’s the kosher way to prepare a chicken

I remember being struck year’s ago by a woman I met in passing in the locker room at the health club.  She was a Russian immigrant who had recently relocated to Chicago.  She was talking about growing up in Communist Russia, where practicing any religion was forbidden.

Her family didn’t self-identify as Jewish, but she recently was starting to reevaluate certain traditions they had always practiced. Out of habit, and with no apparent meaning…like lighting candles on Friday nights—a Jewish, Shabbat tradition.

So what happens when culture is removed from the acts of tradition?  Does it tell a deeper story of familial history, or perhaps world history?

What are your family traditions?  Do you know why?