Cultural Equivalence and Baking Favorite US Treats in Brazil 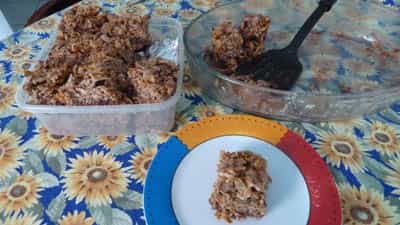 I knew I was in trouble when the nice lady at the grocery store said “powdered or liquid” when I asked for marshmallows.  Well, not actually in trouble, that would be the fact if there was only one way to do things…the “American Way.” But when you are involved in a multi-cultural family you know there are often many ways to do things.

I love the idea of  “cultural equivalence.”  In translation it might be finding the right word match to convey local sayings.  Or once when setting up a “Teddy Bear” exhibit at O’Hare, we included cultural equivalence for making a child feel comforted.  Teddy Bears might not be in every culture, but the idea of comforting a child is.  Like pita bread is to nan is to tortilla; or spaghetti is to raman, or bowing is to shaking hands.

While some cultural equivalents are obvious, some are the “mother of invention” as one tries to make favorite recipes in another country.

Not that we needed to have our “own” foods while in Brazil.  They have plenty of their own treats there, from pao de queijo (delicious little cheese breads) to brigadeiros (chocolates covered in chocolate sprinkles) and beyond.  It was just that my goddaughter still remembered the Rice Crispy Treats I had made for her during her one-time trip to the US in 2001.  Now that I was visiting her in Brazil, wouldn’t I please make them?

So, pretty much NONE of the ingredients were available in Sao Paulo.  After following the attendant from the bakery to the frozen food section (she was so nice I didn’t have the heart to say you clearly have no idea what a marshmallow is) we moved onto cereal, only to confirm my suspicion that there are no rice cereals available.  Since I had apparently used both Rice Krispies and Cocoa Krispies when Pri had been in the US, and she had her heart set on a vanilla/chocolate combo, we settled on “Sucrilhos” which are basically miniature sized, a little thicker, Frosted Flakes.  Also available in Chocolate.

We splurged and bought real butter, and went on to a specialty store which was assured to have marshmallows–and indeed we found something called a marshmallow, that was a circle, about 8 inches in diameter, with two layers, one white and one pink, about an inch thick.  Squishes like a marshmallow…so we bought three of them.

At this point we just devloved into a science experiment.   Going from memory (one cup butter, bag of marshmallows, rice krispies to stick?) we melted the butter, which was a different consistency in Brazil and was still a little thick and creamy even when melted.  That required adding extra marshmallow, which was more the consistency of peeps to begin with, and melted into a pretty liquidy (which I had now idea how to say “liquidy” in Portuguese, since it’s not exactly a word in English to begin with) substance, that required pouring in the entire two full boxes of cereal, one chocolate one vanilla, mixed together for a massive glob of “Sucrilhos” com Marshmallow.  The marshmallow liquid then sank to the bottom of the cooling pan for a hard, rubbery base…

Which turned out actually kind of delicious

And my niece/goddaughter, for whom I went to three stores and messed the entire kitchen…loved them!  With the sugar coated cereal and extra sweet marshmallow it was a sugar high not to be missed.  Granted, it was probably most appealing to my 10 year old son and 20 year old niece, but then it gave something else for the cousins, who speak different langauges, to do and enjoy together.

Baking in a culture other than my own reminds me of ordering in restaurants in another country–you have to approach it with a little latitude, because your never sure exactly what you are going to get.  But in some ways that’s the delight of sharing  and learning about another culture.

How do you adapt to other cultures?  How do you share our own culture when you are there?