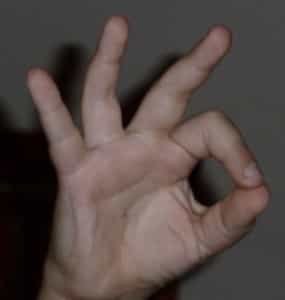 Technically this could be construed as my fault, after Lucca went with me to a client’s art opening a few years ago.  The central piece of the exhibit was a beautiful, supersized hand, making the “okay” sign, the ultimate symbol of peace and spirituality in the artist’s native India.

Except that I had to laugh.  “Hmm, wonder what someone from Brazil would think seeing this?”

“Well, the ‘okay’ sign means something very different in Brazil.” In fact, it’s the cultural cousin of the middle finger in the US.

“I got sent to the vice-principal’s office today,” Lucca announced.

Of course.  “Just tell me exactly what happened.”

Lucca continued, saying that he was only being helpful, by letting his friends know that the “okay” sign meant something different in Portuguese.  That led the boy of Italian heritage to show the Italian cultural equivalent (running one’s fingers from back to front under his or her chin), which caused the child of Russian heritage to pronounce, “Hey, that’s the same thing in Russia!”  Then someone asked the boy of Korean descent if he was familiar with the pinky sign, and he shared that was actually attributed by most to being Chinese, but in reality was Chinese-American.

But herein lies the problem of thinking it’s funny. This is the same child who noted that curse words are a social construct…that words themselves cannot be right or wrong…it’s the intent with which the word is used that makes it “good” or “bad.”

To which I say yes and no.  While age 10 renders “because I’m the mommy” ineffective as the end all reason to stop discussion, I will say this:

We live in a pluralistic society where people agree to abide by certain rules to live harmoniously in society, and one of those rules is that we won’t make vulgar hand gestures to one another at school.”

End of story, right?  Until tonight, when he says “but they’re not vulgar in the US, the society we live in, so how can that be pluralistic if people haven’t agreed in the society where the incident took place?”