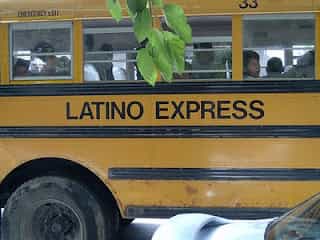 “Mommy, do you think this is racist?

“Leaving the museum yesterday, as we were getting on the bus, there was a line of buses, and one was called the Latino Express, and only Latino and African American kids were getting on it.  The other students, and even my teacher thought it was racist.  I thought maybe it just went to a neighborhood that was mostly Latino, because when we got to Western, we turned right, and the bus turned left, to go south.”

I said, “it depends.  If it was intended as segregation, as in this is the Latino bus, where only Latino’s ride—like in the olden days there were whites only and blacks only facilities, then of course it would be racist.  But,” I imagined, “there’s no way that would happen, at least overtly–you couldn’t legally have a bus just designated for Latino’s.”

How Our Own Lens Frames What We Think

“My guess is that perhaps it’s a not-for-profit designed to get exposure to the arts for kids from different neighborhoods, that perhaps targets kids of Latino heritage,” I said, looking at it through my lens and past experience of working in arts, education and not-for-profit programming, and familiarity with demograhics in the Chicago Public Schools.  “But,” I added, “if everyone in your group thought it was racist, it seems it is doing a disservice by inadvertently labeling all the kids getting on the bus.”

Or is one’s own cultural identity the lens that frames our reaction?  Lucca, who is Latino, thought that perhaps it was just a statement of fact, given the neighborhoods the company might serve; one blogger, who self-identified as African American, said “that’s like naming the school bus in the black neighborhood the Soul Train or the Freedom Ride;” and, while I hate to give it credence by even mentioning it, one White Supremacist* commentary that surfaced in a quick web search for Latino Express was angered by the moniker, seeing it as a sign of encroaching power.

So does the Latino Express stand for?

In reality, it looks like the Latino Express is simply a plain old bus company, and possibly one that is not so careful nor socially conscious (based only on a YouTube video of poor driving, and reports from the Teamsters  that “Latino Express is doing everything it can to deny basic rights to nearly 100 Hispanic and minority school bus drivers in Chicago.”)

Why Don’t We Ask? Metaphor for Perpetuating Stereotypes

At the end of the day, I still don’t know why the company is named the Latino Express, and the reason I don’t is also a good parallel to why stereotypes can be perpetuated.

I was too busy and too afraid to call and ask.**

It takes time to learn about others, and we have to overcome the fear of offending or exposing our own biases, to go for deeper meaning.

What do you talk about with your kids on the drive to school in the morning?  How would you have explained it?

* Sorry if you want to find the source, but not sorry that I won’t run a link to a white supremecist website–don’t want to do anything that would promote it in any way.

**Addendum—darling Lucca put me up to calling the company this morning, after seeing the movie “We Bought a Zoo” last night, which preaches “sometimes it just takes 20 seconds of blind courage” to get things done.  So, in less than 20 seconds I looked up and called the number.  But will try again, to try to get the real story behind “Latino Express.”