What a Brazilian Child Gleaned from USAmerican Cartoons 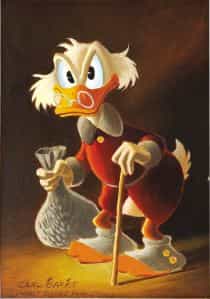 I can’t tell you if this is a story about

I am, of course, talking about Donald Duck!

To be specific it was the revelation of my Brazilian born and raised husband, that he had an assignment to write a paper in 5th grade about what the Donald Duck Cartoon says about USAmerican Culture.

“We thought American’s were awful, money grubbing, selfish people who didn’t care about family,” he says.

Aside from being fascinated that 10 year olds in Brazil were taking the time to explore this topic so deeply, when you put it that way, it seems so obvious.  Huey, Dewey and Louis seem to always be only under the care of the irresponsible Donald.

The primary adult character, the kids’ great uncle and Donald’s Uncle Scrooge McDuck is always too busy with money and business to see them.  When they go to Uncle Scrooge’s place of business, Donald is never allowed inside the office!

That last item seemed to be the greatest affront to my husband.  Filtered through my own familiarity with Brazilian culture via so many family visits and ties together—it makes sense—a close, tight knit extended family, regardless of personal shortcomings, seems to be the norm.

I’m sure if I did extensive research, this could be discredited—what about Daisy, or the times spent with Chip & Dale?  But media is about impressions, and impressions are garnered in less than a couple of seconds.

Next Friday, 11/9, I’m facilitating a panel discussion on “Transforming the Racial Paradigm,” that will look at bias and racial identity in the US and Brazil.  One of the panelists, Marcelo Jarmendia, a Brazilian native and founder of Brazil in Chicago language and culture school,  wonders at the US inclination to label and categorize everything.

Whether it’s the “Stingy Rich Uncle” or the “Irresponsible Nephew” in Donald Duck, or the “African American,” “Caucasian” or “Hispanic American” in current culture, our US American need to typecast seems ingrained.

And while within the US we may feel it adds depth and voice, after last night’s conversation with my husband, perhaps we aren’t “smarter than a fifth grader.”

What do you think?  How do labels for cultural identity help or hurt?