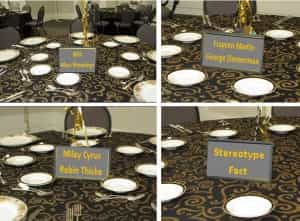 I have been working on a blog post on the Trayvon Martin shooting at least since the verdict last July, and probably since the actual shooting in February 2012.  And, you know what?  I have accepted today that it will never happen.  I have been accused of being too politically correct, and of having a “pathological need to be right” (okay, that one was a little exaggerated), but combine the two, couple it with a hyper sensitivity to unconscious bias and intercultural perspective, and of course I would never write about it.  “What if I’m wrong?” “What will people think of me?”

I could get mad when People Magazine writes an article about George Zimmerman’s trial that professes “neutrality”, that says “no one will ever know what really happened.”  Well, but no one disagrees that Trayvon was walking home, minding his own business, when George Zimmerman initiated contact with him.  (And then People went on to include a letter to the editor praising their objectivity–wonder how many they had to sift through to find that one.)

I could go to a rally with my family and wonder why there were not more white people there, like the Chi4Trayvon rally 7/20/13 in Chicago.  We may have been the only ones, just about.  But, Stand Your Ground + Conceal and Carry means everyone should be scared.  And, what parent doesn’t tell their child to run if a stranger follows them.  “Stranger Danger!” is one of the first words you teach, right?

I could even ponder a story by  Shankur Vedantum on NPR about tools that work to actually diminish unconscious bias using “rapid-fire ways to disable stereotypes.”

But instead, I’ve come up with a brilliant solution.  Kind of like Tom Sawyer getting his friends to whitewash the fence for him, I can couple this with my dilemma of what to do for my son’s Bar Mitzvah next April by making other people make brave, bold statements about current events instead of me.

Instead of “We’re sitting at Table 10,” it could be “We’re sitting at the Trayvon Martin/George Zimmerman” table.  You know… a la “talk amongst yourselves.” A sample kids table could be the “Miley Cyrus/Robin Thicke” table–why was Miley ostracized and nothing said about Robin?” or “really, her performance was just gross.”

The “NRA vs Mass Shootings” table I’m sure will be rowdy, even if everyone is on the same side of “you don’t need an automatic weapon for anything” (I would say for hunting, but there will be a large contingent of animal rights activists at the event so I won’t use the word hunting…wait, that could be another table.)

And there’s always the potential (if I wasn’t PC I’d replace potential with reality) of family dysfunction and conflict when the big group gets together–this handy table assignment system will help guide arguments to be around important current topics, rather than lingering disagreements or stale dialogues from 40 years ago.

So, please share your table placecard ideas.  And let me know if you need a really good event planner for your next event. I’m sure this one will go off without a hitch.