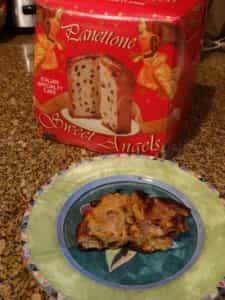 The first paragraph I will hopefully delete before publishing: I most often get writer’s block by triviality–Interculturalism has to do with anti-racism, and there is awful cr#@ happening in the world because of intolerance, and I can’t help but belie my position of privilege by writing about making Panettone Bread Pudding in the middle of my warm and comfortable kitchen.  so, I just won’t write.

But on the other hand–this moment of making this seems to be the epitome of why it’s good to know other cultures and customs–and isn’t that ultimately the goal–to be able to draw from the best (or even just the natural day to day customs) of different cultures and coalesce them naturally into a whole?

Impetus–Catering to picky child eater (that would be the US American part) who won’t eat breakfast despite being offered 8 different options (also US American–and perhaps White US American to be specific–the opposite/one possible alternative perhaps being “you should be happy you even have corn flakes to eat!”).

Facts–we have this panettone–the Italian cultural equivalent to the infamous christmas fruit cake (aka door stopper…is that a Christian, American or English cultural tradition?), that is in our house via Brazil (very common and nostalgic for my Brazilian husband to eat, gift, etc. Panettone during Christmas).

Family History–Our Russian Born, German raised Au Pair (oh, the privilege thing again–thank you Natalie–forever grateful to you) used to take our leftover bread and make Bread Pudding via a recipe she found in our “Spice and Spirit of Jewish Cooking” cookbook, which added bread pudding into our lexicon of things that are easy and delicious to make.

Extenuating Factors–Yikes–totally forgot the Oven was broken!  We can’t bake this in the oven!

Deus ex Machina–we know how to use a skillet and bake this on the stove-because if you draw from Brazilian tradition, that’s how they sometimes cook Pizza–on a special, covered, stove top pan.

Break up 1/2 of a panettone into small pieces.
Separate 5 eggs. Beat the yolks with a couple tablespoons of sugar, pour over the panettone piece
Beat the egg whites, add a little lemon juice, pour over the bread mixture
Slice an apple, and coat with cinnamon and sugar
Melt a couple of tablespoons of butter on the bottom of a skillet, add the apples, and spread them to coat the bottom of the pan
Add the bread mixture, and spread evenly to cover the apples
Cook on Medium to medium low heat, until bread pudding is solid (probably about 30 minutes–check to not burn bottom)

And, voila–delicious.  And, for one last dose of USAmerican Culture (okay–we do not own the rights to compulsive dieting, but feels USAmerican because of our tendency to overeat due to overabundance) one 6th of this Pudding is 10 Weight Watchers Points (includes being served with Joseph’s Sugar Free Maple Syrup.

So, in conclusion–I’m just suggesting that interculturalism, awareness of other cultures, understanding day to day habits from other cultures–maybe doesn’t always have to be about something that is world changing–but seems like a good practice to be able to easily draw-from and use bits and pieces from all cultures to create something new…isn’t that sort of the point overall?  Not weighing and judging but being flexible and adaptable to all?