International Birthday Cake, from Stone Henge to the Burj Khalifa 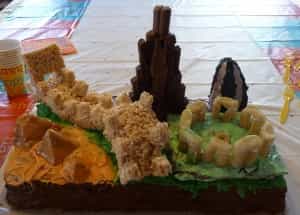 A colleague who is passionate about orchestra was saying how proud she was that her son was also interested in orchestral music.  I guess this would be the equivalent from a son for a parent who was interested in world cultures?  What do you want on your birhtday cake for your 12th birthday?  The Pyramids of Giza, The Great Wall of China, the Burj Khalifa, Stone Henge, and the Bullet Building of London…all edible. 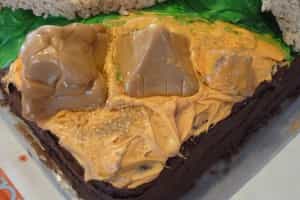 Caramel squares, softened (for a couple of minutes in the microwave)
Smallest one out of three Toblerone triangles, glued together with caramel, and iced
Special touch…sand/gold colored sugar crystals

Three 4th-dynasty (c. 2575–c. 2465 bce) pyramids erected on a rocky plateau on the west bank of the Nile River near Al-Jīzah (Giza) in northern Egypt.

The Great Wall of China 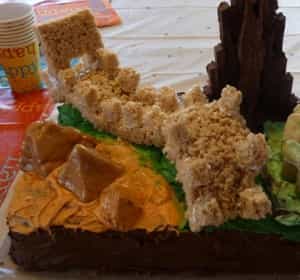 Just like a gigantic dragon, the Great Wall of China winds up and down across deserts, grasslands, mountains and plateaus, stretching approximately 8,851.8 kilometers (5,500 miles) from east to west of China, with a history of more than 2000 years. 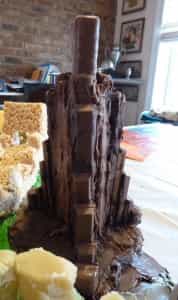 KitKat and Twix Candy Bars, glued together with melted chocolate chips, then placed in freezer until set.

The Burj Khalifa is the tallest building in the world, located in Dubai, United Arab Emirates. 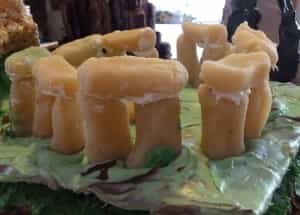 Marzipan (Almond Paste), glued together with vanilla icing mixed with a little corn syrup.  Built on a piece of Matzoh Brittle (a passover favorite–melted butter and brown sugar brushed on Matzoh, baked, and then covered with chocolate chips)  Green icing added for ‘grass.’

Estimated to have been built in 3100 BC, Stone Henge is located in Wiltshire, UK.  Speculation on the reason it was built range from human sacrifice to astronomy. 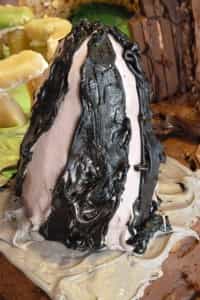 Chocolate brownie, mixed with a little chocolate icing to stick together and molded to form the shape.  Iced with vanila icing mixed with corn syrup for smooth gray covering, with black icing added for detail.

Also known as The Bullet Building, The Gherkin , this is one of several modern buildings that have been built over the years in a historic area of London.