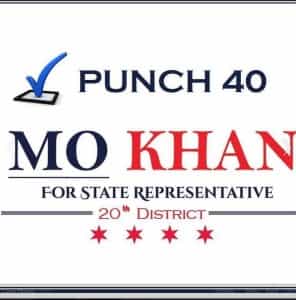 So a representative from my Alderman’s office called the other night to ask for my vote in her reelection. “Overall I’m satisfied with her work for our ward and plan to vote for her,” I said, “but there is one thing that I just wanted to share that really bothered me. It was a phone message that she left during the last election for state representative…a tape recorded message urging me to vote for her favored candidate, and not to vote for  “Mohammad Khan,” and “Mohammed Khan this and Mohammed Khan that.”

Oh come on!, I thought the first time she said the name, Mohammed, my discomfort growing as she said it more times. ..The candidate is Mo Khan.  Mo Khan,  Park Ridge, IL native; Mo Khan, a graduate of the local Maine West High School; Mo Khan with a Bachelor’s degree from the University of Iowa. Mo Khan, USAmerican born and who, on all of his materials has only ever referred to himself as “Mo.” The Alderman, however, made a point in her very brief one or two minute message to use his presumed full name, Mohammed, several times.

I thought it was racist. I thought it was intentionally designed to be fear-mongering, imagining the effect of her dropping the name “Mohammed,” in our primarily white neighborhood.

Before I go further, here are a couple of things for clarification. I am not calling the Alderman racist, but rather looking at the racialized implications of the act.  On that note, you could say “Oh, Deanna you’re the racist one for pointing this out.”  But, thankfully, pointing out racism does not make one a racist. (That’s affirmed by US Supreme court justices Harry Blackmun here and Thurgood Marshall here.) You also could say, as several have said to me, “no, she was just being formal, even respectful, using the candidate’s full, given name.”

But, the US cultural norm is to refer to people in the way they refer to themselves. And there are other examples of like instances in popular culture, such as referring to Barack Obama as Barack Hussein Obama, where even John McCain actually apologized for someone intentionally using the name the Hussein (see the article in Time Magazine.)

If it’s your mom and you’ve done something wrong, as in “Mohammed Khan you come here this instant, young man!” then, no, it’s not racist. But if it’s an Alderman and she is intentionally doing this to try to convince you not to vote for Mo Khan, then I think it is. My perception of her intent was “if his name is Mohammed people will think he’s Muslim and if people think he’s Muslim people will not vote for him.”

And, while I believe the Alderman’s strategy was intentional, the voters hearing the message may respond with unconscious bias without being aware of it. Plus, the format of a private message to residents doesn’t give Mo a chance to respond and clarify his own identity regarding faith—or for that matter, it doesn’t provide an opening for a dialogue around faith that involves the other candidate.  At which point most voters would conclude, oh, right, that’s not relevant. (For the record, I have no idea what religion Mo Khan is—and, for that matter, from simple Internet searches, could not confirm his full, legal name is indeed Mohammed.)

In the end, and perhaps this is the best lesson for the Alderman, people may receive her communication through a different perspective. In my case, her tactic didn’t work. While I was already looking at this candidate, this call pushed me over the edge to absolutely vote for him.