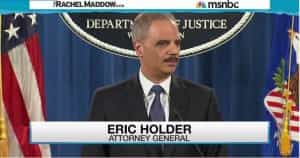 I happened to read John McWhorter’s article from Time Magazine (November online, December in print) just yesterday. He’s married to our cousin, so my mom likes to clip articles she sees by him. It’s sort of the adult equivalent of putting your child’s artwork on the refrigerator because you’re so proud.

But in this case, it was also a way, with his expert, sharp, insightful commentary, to help us find language and perspective as we discussed, disagreed, pondered the events of Ferguson, a mere 20 minutes from my parents’ house in St. Louis, but really a world away.

Reading the article yesterday was particularly powerful, because I stumbled upon it barely an hour after hearing Eric Holder’s response to the Justice department’s  report of their findings on the practices of the the Ferguson Police Department.

McWhorter’s commentary last fall said that he thought the facts in the Michael Brown case “were too muddy to rally Americans” around a turning point when it comes to race in America.  And while he thinks that Michael Brown might not be the one to be the civil rights icon to make a key difference, here’s what McWhorter said last fall, about the real underlying question that emerges:

“The key element in the Brown-Wilson encounter was not any specific action either man took — it was the preset hostility to the cops that Brown apparently harbored. And that hostility was key because it was indeed totally justified.

“The right-wing take on Brown–that he was simply a “thug”–is a know-nothing position.  The question we must ask is: What is the situation that makes two young black men comfortable dismissing a police officer’s request to step aside?”

“These men were expressing a community-wide sense that the official keepers of order are morally bankrupt.”

That last statement is so incredibly powerful in light of the Justice Department report that showed “searing pattern or practice of racial bias with both Ferguson police department and the local courts.” (MSNBC report from the Rachel Maddow Show.) The report clearly shows a moral bankruptcy, ongoing for years, exposed because of the incident. One can only wonder how other Police Departments around the country would fare with similar scrutiny.


Executive Diversity Services is working with Police Departments in the Seattle area to address issues of implicit bias and provide diversity and inclusion programs to support their work. Learn more at www.executivediversity.com.