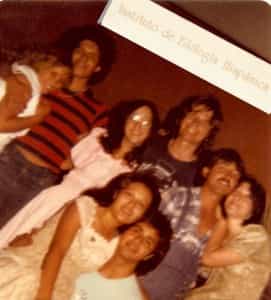 I got my Parkway Alumni News in the mail today, and read about a kid who, now grown up, searched for his favorite high school teacher, to say “thanks.” Now a successful entrepreneur, he also sent her a check for $10,000. She said it made her feel like she “won the lottery!”

In honor of Teacher Appreciation Week, the Association asked alum to write letters to their favorite teachers. For me, I would say Sr. Corcoran (3 years of middle school Spanish) had a big influence on who I am today.  So, here it goes…

While I could write this in Spanish (albeit with a little help from Google Translate), you’ll be pleased to know that 30+ years later I still speak passable Spanish.  In fact, after our school trip to Saltillo Mexico in 1978, I thought it was so cool to speak another language, be immersed in another culture, that I starting taking French.

And, even though I tested out of (aka earned credit for!) nine hours of college Spanish and five French, I still took two years of Spanish in college and used  French as my ‘original language’ for reading and writing about literature, for my Comparative Literature degree.

And, if your inspiration for a love of language didn’t stop there, I married a man from Brazil, and now speak Portuguese!

What’s so funny about señor Corcoran is that it’s not just me who has “señor” stories…My whole family has them!

My younger sister and her friends would bring up my name and get Sr. to tell stories about me, as a tactic to get out of working in Spanish class when she followed me three years later. My dad loves to tell the story how he saw señor at a crowded event one time. He just shouted “Senor!” which was plenty to form a congenial bond as the two waved and greeted each other from across the room.

My post 9th grade trip to Saltillo, Mexico was transformational. After three years of “Levanta-te” (stand up); “Pasa a la mesa” (go to the table); “Toma el libro (get the book), I got off the plane and was a regular “papagallo” (parrot), talking and interacting and understanding and connecting.

I’m not going to lie…I was Sr.’s favorite, in a  family where I was the middle sister and following two years behind my older, star sister. That felt special. And, whereas maybe I was a little chubby compared to my peers in the US, when I hit Mexico with my long blonde (Sun-in assisted) hair and voluptuous figure…I was a fairy princess.

I found an ease of interacting and the confidence to stay with the exchange group or venture off with my local tutor to a family wedding, where, for the first time ever, I was “the only.” The only white person, the only minority, the only native English speaker, the only one who was different, in a vibrant see of dancing and laughing and celebrating.

Who knows—maybe I pursued languages for all the intellectual reasons, or maybe it was vanity–I just liked the attention, but, either way, Sr. Corcoran was the one who inspired me, taught me. It was never about testing and  grades but more about his imparting knowledge and how fast I could drink it up and synthesize the language until it became my own. It was about transfer of knowledge that opened a door to an entire world.

Is there a teacher or mentor you’d like to thank?  Who inspired the earlier version of you?