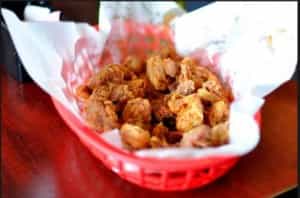 The lady was standing in front of the cash register with a tray full of baskets of fresh cooked battered and fried somethings, as they entered the road side stop somewhere in the middle of Illinois.

“What are those?” asked her teenage son.

“Fried chicken gizzards,” said the ‘gas station chef’ as she placed the baskets into the glass warming case.

Lori’s nose scrunched, her forehead wrinkled, an audible “eeewwww” escaped from her lips.

“They’re just another part of the chicken” said her son, stating a fact. “If you would eat the leg or thigh or breast why not a gizzard?”

A friendly young man working at the gas station tried to help. “I grew up on those,” he said enthusiastically. “They’re delicious!” capturing all of the nostalgia of his childhood in that exclamation.

Now as an interculturalist that was a clue that these were endemic to the culture and customs of the region and therefore something interesting to at least hear about if not consider trying. Instead my friend Lori said “gross,” adding, directly to the young man who so loved them, “aren’t they chicken private parts?”

“No,” her young friend persisted, patiently, describing not only which part of the intestine they were from but tying it to chicken behavior…”that’s why you might see chickens eating rocks to break down food in their stomachs.”

In the end, she bought some for her son, but passed for herself.

Once back in the car Lori realized the missed opportunity and indeed took a bite of one for the experience of it. The taste was benign (it tasted like chicken), the texture was a little chewy, but she could now know comfortingly that she would not eat a chicken gizzard in the future, not because she was grossed out by it but because the texture was a little bit much for her.

So why was this experience so awful that Lori…I mean I, had to pretend it wasn’t me?

Because it’s classic “un” cultural agility. It’s reverting to factory settings when confronted with something strange and different, especially when tired or rushed.  It’s forgetting that the skills of cultural competence, the more practiced, become second nature and can apply anywhere, even in seemingly homogeneous (e.g. all white) cultural exchanges.

What might have made the exchange different? Remembering to…

What might I have learned, if I had asked him to tell me more stories about his life as a boy or what it was like growing up in rural Illinois and the best way to cook a chicken gizzard?

Intercultural exchange does not have to be international nor does it have to be across an obvious and visible difference. Perhaps it’s just one of preferences and individual experience—and using your cultural competence skills in those situations would mean a lot more Zen in the world.

What situations have you been in where the skills of cultural competence might have helped, where you least expected it?