Turning into your Mother? Thank goodness! 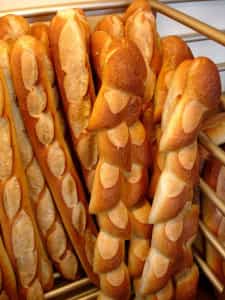 Running errands this morning I heard about the looming baguette shortage in France and it reminded me that sometimes it’s okay to grow up and turn into your mother.

Wait…there were a few steps in between. 1. The looming baguette shortage, led to 2.) thinking about all of the baguette I ate traipsing around Paris on my mom’s 80th birthday trip this summer, led to 3) remembering stopping by the store around the corner from our hotel to bring a baguette back to my mom for breakfast, led to 4.) smiling, recalling the sincere and effusive “Hello, how is your mother?” from the guy who worked at the store.

Before our trip, the two ladies traveling alone (which I discovered is in and of itself an old fashioned notion—given the number of brave women traveling ‘unaccompanied’ from the US to Paris, from Indonesia to Malaysia, from Australia to New Jersey) we were warned: Do not talk to strangers. Do not speak English out loud on the street. Do not engage in conversation. In all of these scenarios we were promised to get pick-pocketed, or worse.

But, my mom said on the plane to Europe, “I don’t know any other way to be. I thrive on talking to others, sharing my story, finding out theirs…and I think they like it too.”

So when we lingered too long in front of the biscuits at the corner Carrefour Quick Stop, and the gentleman working at the store and patiently waiting to re-stock the shelf said “Excuse me, may I work please?” I got embarrassed…my mom was taking too long, looking for her familiar American products which I had already told her they didn’t have. Couldn’t she just pick something French and move on?

Oh no, not after this friendly, effusive invitation.  “I like to have my coffee in my room in the morning,” she explained, “and need to eat something with it. But it can’t be too sweet. Or salty. Because my stomach…” At which point she did explain a little too much, for my taste, about her sensitive digestion.

But as much as I tried to scurry her to the check-out line, she continued talking, telling him about our trip, her amazing daughter (that would be me) and he engaged, asked where she was from, how she liked Paris. She explained that she had been told not to talk to strangers but would make an exception “because he was so handsome. And had great skin.” And probably at that point touched his cheek to emphasize his smooth skin…all of which, he loved!

It’s like when I used to get embarrassed when she oogled over other people’s babies. Until I had my own…Who doesn’t want to hear someone tell you your baby is the most beautiful baby they’ve ever seen. Objective opinions are helpful! “I’m not saying anything bad,” says my mom, “I’m showing interest.”

And so, a week later, in a foreign city, 4,000 miles from home, I get a grand welcome from an old friend.

Like they use to say on “Cheers,” it’s nice to go someplace where everyone knows your name.

“Nothing wrong with that,” says mom. And, you know what?

What have you learned from your mom?