What Cultural Customs Would You Adapt for a Super Culture? 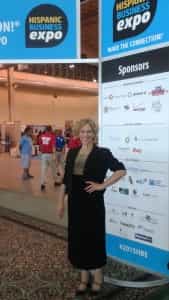 I find when I start to write about something else, it often comes home to me being the hero of the story. For example, this is really a piece about how nice it would be for everyone to adapt the “Family First” sentiment that is part of Hispanic culture to the United States. But, as the heroes in the Old Spice commercials say, “back to me” first.

Me, supermom, entrepreneur, who signed up to attend the Hispanic Business Expo to prospect for clients. I convinced my 14 year old son on summer vacation that it would be a fun trip to Navy Pier, he would meet and be inspired by a 10 year old entrepreneur, and the lynch pin, I’d take him to lunch somewhere downtown after the expo. Supermom, successful in work and parenting.

Me, mom of the year, watched over the adorable 5 year old girl, made her lunch…rescued her from sitting in the cab of the pickup truck while her father and crew removed snow from the drive. Wait, even better, I had special powers of speaking Spanish, so that I could talk to her as well.

I’m just watching Alan Headbloom’s interview with Jorge Gonzalez, the new head of the West Michigan Hispanic Chamber of Commerce (on his show “Feel Like You Belong”). Gonzalez talks about setting up a kids area at the bank he managed “like you would find at the Dentist or Doctor’s office” because in the Hispanic community people do things as a family…he anticipated the whole family might come in to sign the mortgage. “Absolutely,” my Brazilian husband echoed—families, extended families, are much more connected, he said proudly.

And my immediate thought was…No wonder I felt so comfortable having my son come to the Illinois Hispanic Chamber of Commerce Event held on August 6, where no one batted an eye or didn’t talk to me because I was a Mother. Rather, he’s a young man and there was lots of learning to do. One person heard he had interest in Cuba and introduced him to the new President of the Chicago Cuban American Chamber of Commerce. People asked him questions, included him, or (he’s still 14) when it was enough he explored Navy Pier so I could network. The only person who (thankfully) batted an eye was the one giving out samples of Mountain Dew’s new “extra caffeine” drink when my son went back for a 6th time.

And, the little girl? After a moment’s misplaced judgement, I realized—here’s a dad who has one day to make a lot of money after an extraordinary amount of snow and he also had to care for his daughter that day. What mom hasn’t had work/family issues to juggle?  I’m glad I could help while he helped me.

If this is Hispanic culture, where there is more of a family orientation, then, “me llamo Deanna.”

The thing is, we love our children, but it’s not like children exist for women…children are not a women’s issue. Or, to turn this around, the fact that children are a women’s workplace issue in the US is what’s wrong in the first place. Because, last I heard, no matter how advanced technology gets (scene from Sleeper aside) having a baby still takes a man and a woman, a mommy and a daddy…so what’s up with this idea that a mommy can’t be a good businessperson?

If only we could pick and choose the parts of different cultures and bring them all together for a super culture…let’s take the family first sentiment from Hispanic culture, the four-day workweek from the Netherlands, the “it takes a village” eye to raising responsible children from African cultures, the respect for elders from Native American or Korean cultures.

What cultural customs or sentiments would you add for this super culture?