Dear Old People: While We Were Sleeping Here’s What Happened in Media 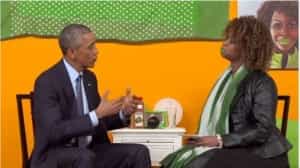 This is a true story…President Obama is going to trek through the Alaskan wilderness with survival expert Bear Grylls for a special edition of his Reality TV show Running Wild.

After a moment’s gut reaction of ‘can he do that?’ (He’s the President…he can do anything), I realize it’s a brilliant way to talk about the effects of climate change in a way that will get exponentially more people watching, than, let’s say, a one minute news clip from a press conference.

And, President Obama appeared on Glo Zell’s YouTube show (over 5M subscribers—over 1M viewed the interview). Really. The President on YouTube…where the host covered all the hot topics—from freedom of speech on the Internet to bias in policing to Cuba and gender equality.

And, for anyone who says, “but she’s wearing bright green lipstick!” I ask you to pause and consider if that’s any different than Groucho

Going back to “old people” I use the term inclusively and affectionately. For even late Boomers (born in early 60’s) they would have gone from being excited about the invention of a correction cartridge for their Smith Corona Electric Typewriter (that was big stuff for early 80’s college students!) to…well, the President appearing in podcasts and YouTube.

I brought up what was to me, novel news, about President Obama being on Running Wild and YouTube with my husband and son at dinner, and ended up realizing this is not necessarily novel, but about the right time, with YouTube launching in 2005.

President Warren G. Harding was the first to have his voice transmitted by radio in 1922 after radio was invented in 1895 and it was considered “a revolutionary shift in how presidents addressed the American public. Coolidge was considered a radio pioneer, when he began broadcasting the State of the Union addresses in 1923.

Franklin Delano Roosevelt was the first president to appear on TV, in 1939. TV was invented in 1927. But, it was John F. Kennedy who was the “first president to effectively use the new medium of television to speak directly to the American people. No other president had conducted live televised press conferences without delay or editing.”

The world it is a changing, and advertising and social media are changing (and have already changed) the way things are communicated.

In the “olden days” (aka the 70’s) when the President spoke, it was on all three of the maximum 7 available channels, and everyone stopped what they were doing to tune in in real time, in their living room. At home. Could you imagine that happening now?

Even if you ‘don’t go for that new-fangled stuff’ being aware and validating it can help in adapting to the world as it evolves.

And it allows you to have empathy for poor GloZell when she tellls her mom she’s interviewed the President, it’s been viewed by over 1.2M people, and her mom says “oh, but is it on television?”

What’s the most surprising place you have discovered news or gained knowledge about current events?

Is TikTok the Most Egalitarian Social Platform?
July 1, 2020