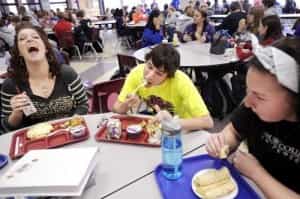 My son…whoa—cardinal rule of becoming a high schooler…he is no longer publicly my son because I embarrass him too much (Me: “How should I behave to not embarrass you?” Son: “don’t be yourself”) So…my FRIEND’s son (mfs) just started high school…a ninth grader at a Chicago public school with 3,000 students.

“I almost got beat up a couple times today,” he shared on the drive home after the first day. “It’s okay,” he continued, seeing his mom’s face contort half in horror and half in confusion as to who to call first, the principal or the other kid’s mom.

Ahhh…the code…how they do things there…the essence of anthropology and learning about other cultures.  It’s like waiting to be last to get on the bus in Kyoto to see where to put the coins in; watching and counting kisses before greeting new acquaintances in Sao Paulo; visiting someone’s house here or anywhere…shoes on or off?

At the core of cultural competence…anthropology and ethnography. Aside from (or perhaps appropriately so) being called “Elf” for his amazement at all that he was seeing, ‘mfs’ applied these skills, watching and learning, identifying the alphas of the society, learning the customs and rituals, to figure out some of the basics to fitting in. Here’s what he learned the first week:

The Handshake:
While admittedly not getting it the first few days, he asked an insider to teach him the method of going palm-to-palm with flat hands touching, and then pulling back until fingers sort of link or cup each other. He’s still working on perfecting how long the fingers remained cupped before separating. (Luckily much less complicated than this high school handshake.)

Eye contact.
Forget the general USAmerican cultural affinity for eye-contact as a show of respect. Do not make eye contact, especially with seniors. And do not stare. Especially at seniors. Especially when they are in the hallway kissing. (and get used to the 4 minutes between classes as the designated making out period.)

Hierarchy and Status.
There are several ways to gain status at high school. One is just by knowing as many people as possible. Another is by being assigned a textbook that was previously used by a popular upperclassman, and they have written their name on the outer binding as in “Hey, dweeb, that was my book…cool.” And never sit alone at a lunch table. That just screams “please beat me up.”

These rules are from the male perspective. There is a completely different set of rules for girls in this high school sub-culture.

Anthropology, ethnography is everywhere—whether you are going to another country or just visiting another town, starting a new profession or going to a new school. Sometimes it’s a matter of just fitting in, but for a high schooler, it can also be a means of survival.

What was a new setting you entered where you had to learn new rules?