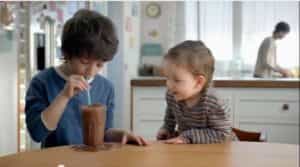 So this was supposed to be an easy piece about targeted marketing. You know—pick who you are selling to, focus your message to appeal to them, and deliver it where they are likely to be. In this case it was a Bounty Paper Towel ‘Spilled Milk’ Ad geared to what I presumed to be a 30’ish millennial mom who was uber cool and in control and could just enjoy her adorable children while they blew bubbles into their milk until it spilled over onto the floor, because Bounty was there to clean up the mess. Or, as I would call it…an over indulgent millennial mom who was doing a disservice to her children by failing to set limits.

Everyone sees that, right? Until a quick Facebook survey to mostly baby boomers (aka my friends and family on Facebook) to say “are you kidding me” said WRONG. “Everyone does it,” my friend Ronny summed it up.

So, the survey—would you allow your child to do this actually ended up being 6 to 5 in favor in the end. But here’s the kicker—it was all yes’s–“Yes because it would be funny and can be cleaned up.” “I remember when I did it…and had so much fun!” Or, my favorite, from a mom who actually let her son do it in her car “Now I remember I have to clean up that mess. Thanks for reminding me,”—until I actually chimed in on my own survey… “Am I the only one who says “not a chance?” I admonished my friends.

Well of course after I jumped in like that others admitted that they would say no too, or those who had previously answered back-paddled or added qualifiers—“I’d let them do it only once,” or “but not in the house.”

In fact, with the results of my survey, and my own “Miss Buttinksy” in the middle, rather than a diatribe against moms of a certain age, this turned into an idea of how stereotypes and unconscious bias (aka assumptions) can cloud perception:

In this case, once you stop and look at it, it has less to do with a grouping by age and more trends in parenting. In fact, I think “helicopter” parenting was originally coined for Boomers. Or, there may be others who say this is race-based (the mom in the ad was white). I led an informal discussion group during Chicago’s Unity Month a number of years ago, and when the subject went to parenting, there was a clear perception trend with the women who were African American expressing shock at the lack of limits as they saw it set by parents who were white.

In other words, in the world of the internet, you can always find opinions that agree with your own. But sometimes it’s good to look at the data to understand your own biases. By jumping in and asking for agreement with my idea, I indeed got it, but that doesn’t mean it actually reflects what others are thinking or the realm of possibility. You already know how you feel about something…why not listen to hear other perspectives.

Cultural competence is based on realizing there are multiple perspectives, and that yours—whether it’s your communication style, how you express values, resolve conflict, or your beliefs—are one alternative, not necessarily the norm by which all else is gauged. The ability to recognize the lens or bias from which you view things, and then adapt to understand or appreciate another’s, is key. Is it easy? Do people make mistakes? Ahem…just ask the person who apparently waited a year to write this post after realizing the bias hidden in it. Thankfully she realizes that recognizing your bias doesn’t make you prejudiced—in fact it’s the key to overcoming it.

But, really, would you let your kids bubble their milk all over the table?