Cultural Adventures to Connect with your Teen 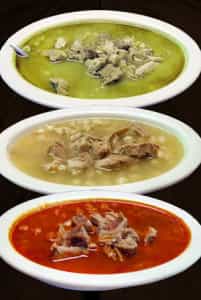 My 14 year old son announced a 5” (yes, that’s a five inch) restraining order against me the week before his first year in high school. From this point forward, I am no longer allowed to touch my little punkin’, the one whom I squeezed and held and diapered and comforted for all of these years, because, according to him, “he’s an adult now.”

So last Friday night, when hubby was away on business and my son said “let’s go out for dinner,” I jumped at the chance for some mother/son bonding. Knowing it was just the two of us and I was driving, I immediately thought of which places were closest, cheapest and easiest.

But for my son, going out is an opportunity for adventure. He suggested that we try the best pozole in the Chicago. Which of course begs the questions “what is pozole?” (a traditional special occasion hominy dish in Mexico), “where are we going?” (to San Juan Pozoleria at the corner of North Ave. and Pulaski in Chicago’s Humboldt Park neighborhood) and “how do you even know this?” (no need to question this—if my son says “it’s the best something or other” he has his research methods and he’s always right—whether it’s a mile away, in another state or in South America.)

My son may not allow me to hug him anymore, but he absolutely knows how to work me, and his charming ways make me prouder than anything you can imagine because I see him taking values I’ve tried to teach him over the years…multiculturalism, not letting fear stop you, cultural immersion, and synthesizing them into his view of the world (aka using them against me). For all of my protestations, he, in typical teenage fashion, had an answer. We started ‘negotiating’ at 5:45, and were out the door an hour later.

I estimated that it would take an hour to get there on side streets (Never, ever get on the Kennedy toward downtown Chicago on a Friday night.) He tried to convince me it would only be 30 minutes per Google Maps. We bet who would pay for dinner…It took 57 minutes, but we both knew who was paying for dinner anyway. The clincher? He told me it would be “more time to spend with you.”  Awww…I couldn’t have said it better…my son is learning PR/Marketing Skills.

So on that first part, with daylight saving time ending, sure, it’s dark, but it’s only 6:30 at night. On the dangerous part, my son knows me well enough that I would never say this out loud, nor would I let a perception of a neighborhood be a deterrent. As I’ve tried to teach him, the concept of “dangerous neighborhood” itself is rife with bias, unconscious or not. As a middle-aged white woman who grew up in a white area, “bad neighborhood” was always equated with “ethnic or racially segregated neighborhood.”  And, as I’ve taught my son (and hopefully led by example) and seen first-hand as we’ve ventured around Chicago’s different neighborhoods, these are all communities where people live and work and raise families.

Not to be completely naïve, it was my son who shared that apparently Pulaski and North Avenue, the intersection of the restaurant, has the highest murder rate in the City (which he learned from some of his high school classmates from that neighborhood, corroborated by online research). But now I countered him, reminding him about models like Cure Violence (that addresses violence through a public health/disease outbreak model) or studies that can predict if someone will be a victim of violence—it’s most often about relationship proximity over where you are in space and time. (Couldn’t resist adding “which is why you should never, ever join a gang or do drugs.”)

I’d been planning such adventures, seeking out new experiences and different cultures, since he was a baby—and now he was taking the lead. So PROUD!

And, indeed, this is often tricky, especially traveling in other countries or here too, particularly if you have strict dietary rules. But the menu was in Spanish and English, and, there’s always vegetarian or non-pork options. For me, I was willing for one night and one experience to be loose on my eating (meaning that there was definitely pork in the Pozole). And on a positive note, hominy is a “free food” on one of the Weight Watcher’s points plus plans, so how bad could it be? We ordered two dishes (a red and a green version of pozole) to share and a delicious mango shake.

So, the short version was: It was 6:30 on a Friday night; hubby was traveling for business, so mom and son set out to try a new restaurant. It took an hour to get there in traffic. They found easy parking across the street from the restaurant and enjoyed pozole and mango shakes, and drove home. That is actually the full story.

Why does it deserve a whole blog post? Because it’s also about staying engaged and interested as kids become teenagers. Yes, it would have been easier (and I was paying and driving so I could have insisted) to go nearby. But it’s not as easy as when they were little, where going to the corner pet store to look at the fish was an engaging activity. Want to connect with your teen? YOU have to enter THEIR world.

In business you have to know when you’ve made the sale, to stop selling. Or in relationships if you’ve won the argument stop arguing. Or with your kids, when you see them embracing a value that is also important to you, put your money where your mouth, or walk the talk…and give an imaginary kiss (from 5 inches away) to the top of their head, knowing how much you love them…and then get up and move.