Jerk, Irrelevant or None of the Above? 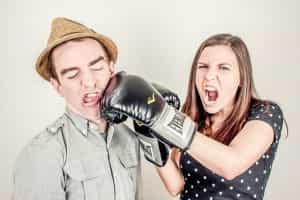 You wouldn’t worry so much about what others think of you if you realized how seldom they do.

My son is always positive his teachers don’t like him. The feeling comes from his nature to be contrary…to espouse the contrary idea to the majority discussion. (Think most teenagers, although for him it pre-dated becoming a teen, so it seems to be part of his personality.)

Everyone knows someone like this—sometimes it’s really their opinion and they like to express is loudly, almost a bully approach to getting their position known–think most political candidates–or at least the ones in this election.

Sometimes it’s a deep and specific knowledge or insight someone has related to a topic–information that is factual but may then counter someone else’s idea. You know, like someone who is an expert down to every last detail about hydraulic engines or has memorized all sports statistics since the beginning of time–if it fits in conversation or they can make it fit, they are off and running.

Sometimes it’s a culturally influenced communication style. Different cultures pace their conversations differently–from overlapping sentences to actual pauses in between sentences. Or use more (or less) hand gestures or emotion or engagement in their voice. Those differences can affect how others see you, or how they hear and respond to what you are saying when you express an opinion on something.

But the point here is not about WHY a person comes across as contrary or domineering. It’s how the person (okay, YOU) feel an hour later or the next time you see the group of people–and how to gauge if your sense is real or imagined. Is that queasy stomach feeling is just a little discomfort at being contrary, or if, indeed, people do really dislike you and wish you would leave?

Here are some signs:

As far as feeling uncomfortable—this is the best place to live—it’s the moment that you are exposing yourself to new ideas, standing up for what you believe in, or courting a new idea or experience. That can sometimes feel strangely akin to nausea.

It’s so easy to stress about what other people think, but the truth is, most are not thinking of you at all. In act, according to an article in Scientific American “On average, people spend 60 percent of conversations talking about themselves—and this figure jumps to 80 percent when communicating via social media platforms such as Twitter or Facebook.” You’re meeting with someone who you thought you bullied at summer camp 100 years ago–first, don’t bully, and 2nd, they probably don’t remember it or remember it differently. Most people remember themselves at the center of their narrative.

So, do people not like you? Maybe (are you a jerk?). But, most likely they are not even giving you a second thought. And that’s okay. Just go into your interactions with others assuming positive intent (that’s a classic guideline in cross-cultural situations, but it applies across the board). Assume that someone is leading with good will unless proven otherwise (e.g. # 5 above).

So, grab the gas-X and live life to your fullest! After all, as seen in this Key & Peele clip…not having an opinion or position on anything could be worse!


When have you stood up for what you believed in a crowd of naysayers? How did it make you feel?