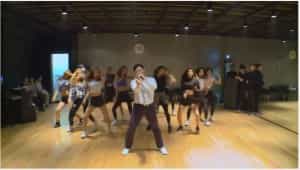 Finding a Father’s Day Playlist for Aerobics was much harder than I thought. Unlike searching for mom songs, which offered a variety of songs in different genres, many upbeat and full of happiness (think Paul Simon’s “Loves Me Like a Rock” or the classic Smokey Robinson “Shop Around”), dad song playlists were all mostly slow and sentimental, perfect I presume for a Father-Daughter wedding dance, but not too inspirational for fitness.

Turning to classic rock Father’s Day songs opened a whole other can of worms…Pearl Jam’s Alive is about a son who discovers his stepfather isn’t his real father…his real father is dead; Jane’s Addiction bassist Eric Avery co-wrote Had a Dad when he found out his dad wasn’t his biological father; Everclear’s Father of Mine, was, again about a dad who ran out…hardly light fair for moving and grooving in a group fitness class.

So, my criteria was simple—the song had to have the word Dad, Father, or Papa in it (which is how Papa-Oom-Mow-Mow still counted), couldn’t be demonizing a bad dad (even Gladys Knight shared all of the good things about her dad before ‘complimenting’ his superior swearing skills), and had to have a peppy beat (Psy’s Daddy topped the list for that) to keep everyone moving during an Aqua Boot Camp class.

I threw in a song to honor my dad who passed away on May 5th (When the Saints Go Marching In—I had the whole class march back and forth the entire length of the pool, something we used to do with my dad, on dry land, when we were kids—the Dixieland Kings version as a nod to my dad’s love of Dixieland, although the Jerry Lee Lewis version was also very upbeat) and a gratuitous Led Zeppelin piece (Whole Lotta Love) for the one dad who takes the class in a sea (sort of literally, given it’s an aqua class) of women, who confided that he loved Led Zeppelin

The result was a 50 minute class (all found on Spotify, and available offline) with everybody singing along, to at least something.  So here it is:

Your Mama Don’t Dance (and Your Daddy Don’t Rock n’ Roll
Loggins & Messina
This one worked for Mother’s Day, too!

Daddy
Psy
The man who brought you Gangmon Style sings “I got it from my Daddy.” Plus, the Gangmon Style dance actually makes a good aqua boot camp drill.

Papa Was a Rolling Stone
The Temptations

Daddy Could Swear, I Declare
Gladys Knight and the Pips

Daddy Cool
Boney M.
This song is kind of hilarious and great for moving. Plus if you watch the video first, you can use their moves.

Papa-Oom-Mow-Mow
The Beach Boys
I did say it just had to have the word Papa in it.

Papa Loves Mambo
Perry Como
Cracked everyone up when it came on. Plus an “athletic” mambo also makes a good boot camp drill

When the Saints Go Marching In
Kings of Dixieland
This was the shout out to my dad. Turns out the brother of one of the women in the class used to get flown to New Orleans to play this song in the New Orleans Jazz Funerals.

Whole Lotta Love
Led Zeppelin
This was a freebie Happy Father’s Day to the one dad in the class, although apparently, Led Zeppelin is referred to now as “Dad Rock.”